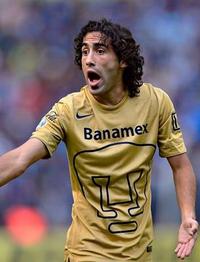 saw a few highlights and are you sure hes not a leftie?
"Only the strongest survive"

For some one that is short, he wins a lot of headers and I would suggest increase in jump like 86. His headers are not always on target but he does win them against Da Silva for example.
Top

havent seen his jump but I guess that suggestion is alright....

I thought he could of been Ambidextrous I guess I was wrong I'm going to change his stronger foot to Left, its pretty obvious its his stronger one he scored two goals with his left against cruz azul.
"Only the strongest survive"

move him to Al-Hilal