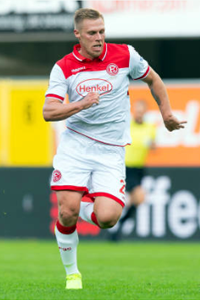 http://www.vfl.de/news/news/article/rouwen-hennings-kommt-zum-vfl-1.html
The intelligent people are full of doubts while the stupid ones are full of confidence.
Top

He's the typical German 2nd tier striker who relies in a intensive, passionate approch to compensate his lack of balance in technical terms. I've seen him like five or six times in BuLi this season. And while he lacks the precision and composure to be a consistent scorer in the top tier, he's still a valuable squad player with his stubborness and his ability to put high pressing to the opp D-Line continously throughout the matches. An important amount of the goals scored by Düsseldorf this season were caused by Hennings forcing mistakes to the opposition with his intensive pressing. That's the main reason he gets regular first team football despite not being a prolific scorer for these standards.

He has 11 goals this season, his team is not doing well but individually he has been fantastic.
Better to die quick, fighting on your feet, than to live forever, begging on your knees!
Top
Post Reply
4 posts • Page 1 of 1