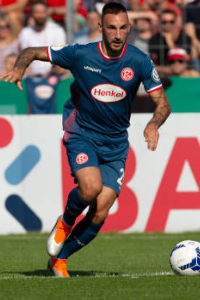 Accorting to the english version of sh*t website goal.com (famous for some ridicolous articles, so you can be right about the fake news) Bierhoff declared that to Tuttosport (an italian newspaper). After this probably fake news, all ridicolous italian online press started to copy-and-paste the article. So I can believe it's all a fake, in this case I hope you can excuse me.
Top

I don't think he should have PES 2011 S-14 makes players too good and fluid at dribbling does he really go on runs beating various players?
Top

This thread hasn't been updated since one and a half years ago, seb do you have any update for the guy?

I think that is hard to make any update of him, because he almost never plays.. :/
...U dared to enter my world...

Well, "almost never" is a bit harsh, he has played a considerable amount of matches, although he is not showing what he was expected to show 2 years ago... And with Rafinha joining, and with Lahm switching sides, It will be even more inconvenient for him this year.

the probelm with Contento is that there is nothing to update, the guy stagnates since his first season.
Top

Call me crazy, but maybe the only change i would make to this set, is creating a gap between his TS and ACC. (TS -1 and ACC +1) then its hard to rate him because he doesn't play to much and he showed the same level during past season... and possibly this. So for his own benefit, a loan could be a good idea!
...U dared to enter my world...

Also his att/def and his technical skills might be reviewed imo, nothing more than +1s and -1s though.

Well, now like 9 months after - I can said this about him:

Just quick - In ATT/DEF ratio he worst than Alaba, if he was better he would be playing instead of him. Rate his DEF value as Rafinha. For me he needs some space to reach his TS, and become faster with more distance. Dont see him with current RES value. His body movement isn't fresh or fluid. He runs at lower speed with the ball at his feet. Never showed attitude in the pitch and is very disordered in positional aspect, caught out of position.
...U dared to enter my world...

Girondins de Bordeaux: http://www.bundesliga.de/de/liga2/news/2014/contentos-wechsel-nach-bordeaux-perfekt-fc-bayern-muenchen-transfer.php
The intelligent people are full of doubts while the stupid ones are full of confidence.
Top