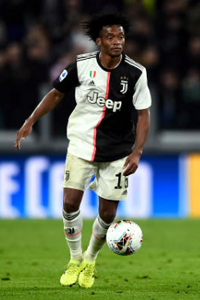 jurgens wrote:I don't like that 88 DA. The 90 isn't wrong at all, guy has got excellent control and confidence in his dribbling.

jurgens wrote: I'm pretty positive that his passing is better than that though, for a sideback hes suprsingly compotent at passing, and can actually pick out diffuct opportunities on occasion. Unless my memory fails me.. he made a few very nice passes vs torino at the weekend. I'd give spa/lpa at least 75 each, but I'm pretty sure hes desrveing of better.

Must insist on this.

After watching him a lot more this season I want to bring up a few things. First off, this guy is seriously good, hes just all round a great player. Theres no aspect of his game that he is lacking in. Hes intelligent, hes a good passer, hes supportive, hes aggressive, hes a great dribbler and hes not selfish and works great with his team. It's been a long time since I've been this impressed with a young sideback... well technically hes not a SB.. but hes far from poor defensivly like a lot of wb/smf's so I feel classing him as that isn't so wrong. To further emphasise on what I said earlier about his passing, all of that is true and more. Hes a very good passer, rarely makes a bad pass, has a above average vision and the accuracy to match it. He picks out quite a few dangerous crosses/early crosses and through balls. Hes about 77/78 for spa and at least 80 for lpa.

Going back to his intelligence.. he really is very smart. Hes often tasked with being pretty isolated on the right wing with 2 players on him, and he rarely makes a mistake and keeps possesion going. He uses his dribbling to retain possesion until he has support, and he can often use it to open up a dangerous situation. It's not like hes some selfish winger either, he usually every dribble he has is part of some team move. He loves to beat a guy, pass, and make a run in behind the defense. He does this almost constantly (needs marauding btw). A lot of wingers just keep going and going, ignoring their team mates, hes the exact opposite. I can't really stress enough that everything he does, he does it well, hes has the ability to keep possession going while also having the ability to penetrate and create danger. Some of his matches this season have just been incredible, vs palermo for example. His supportive movement is also good, he makes movements to keep play going if a team mate needs a passing option. Also, his defensive contribution is good, he plays pretty far forward so he can be exposed, but his defending when hes there is quite good, hes alert and sharp and willing. His response needs to be green, current value would suggest hes real lack lusture, but hes not. Theres nothing his role requires that he doesn't do, at the very least, adequately.

I'd also like to say, I really don't think hes a 93 ACC. I can't recall seeing him accelerating much quicker than a 88 and I've thoroughly gone through his vs vids 2 times now. I could be wrong, but if he does show it.. it's very rare.
Sum up:

Agree for DA.I think his previous value was perfect for him.His DA is very very good ,this season and last season his dribbling is very good,with very quick turn and good skills.STA is nothing over 85-86.He runs a lot in match,in ATT and DEF .His ATT looks a bit more then 75,maybe 78.He have good vision and is very dangerous player in attack. LPA 80,i agree.He have good crosses but i suggest 1 point + in LPS,cause his crosses are fast.And SPA 77-78.He have very good passes for a side Wing/Back and 77 or 78 isn't a bad value for him.

Two great goals from him, the one against Torino and the bomb yesterday against Doria. He's performing fantastically.
Top

He is an absolute beast, one of the best performers in serie a this season. His stamina will probably need to come up even further, as well as attack/passing stats, his passing is really one of his best qualities.
Top

Played several times in a SS/WF hybrid role. Shall we add SS position? Along with the overall update.
Top

Epsi wrote:Played several times in a SS/WF hybrid role. Shall we add SS position? Along with the overall update.

i think no,he tends to stay on the side not really behind the CF..about the set,i think that his DA was absolutely insane this year and in the last months he even improved a lot this skill..i think is more than 89
Top

well, i believe that in my initial update i gave him orange DA, not sure on the number but i think that it was 90.

yeah, he's basically playing as a winger hybrid since the start of the new year, although adding LR and/or Incisive run would fix it rather than giving him SS.

i swear it said tuco the other day

The resistance of Cuadrado is fabulous!
Was always running over 90 minutes (in today's game against Sporting)!
Personally, I thought he was classified (Stamina) with orange numbers... The same with your Tenacity, deserved yellow...

Personally, I did not know him very well, but I was fascinated with his delivery and attitude on the field, great professional!

But it was not just good things he showed ... your BC was almost terrible ... he lost very high balls (he no have able to control) ... I do not think that deserves one BC of 82, I bet more on low greens...

Attention, was the first time I saw a game with great attention of Cuadrado, only take seriously my post if there are more people who agree with me.
KEEP CALM and HURRAY BENFICA!
Top

ignore the money related shit, it's dumb as hell. the rest is interesting, good to see hes starting to get a lot of exposure now.
Top

Surprised to see his Explosive Power at only 90. He's crazy agile. One of the most agile around in my opinion.

I have him at 93 EP but honestly I could even see him going Red.
Top

could possibly agree, but the thing which i (if i recall correctly as i made the set) foolishly overlooked was his ACC, he's red without a doubt...

I have no problem with shifting his Explosive Power to 95.

If nobody objects - I say do it.
Top

čale wrote:could possibly agree, but the thing which i (if i recall correctly as i made the set) foolishly overlooked was his ACC, he's red without a doubt...

don't see that at all? If hes that quick in the first yards.. I think you'd see him beating people with burst a lot more often? but he doesn't do that much at all. A good example of an occasion he had to show red ACC was vs juve, running on the break with Barzagli tailing him to set up rossi's final goal. You'd expect someone that fast to tear away from him, but he didn't at all... we all know Barzagli is quite fast once he gets going, but hes not good at all in the first meters.. quite the opposite
Top

sure he had his moments like that, but then again there are those, especially when it's from a standing still position, he just bursts away in a blink of an eye, it's unreal at times.

For me - his burst is similar to Neymar. Perhaps a tad under. So with Neymar currently at 95 - maybe have Cuadrado at 93.
Top

I have never seen any burst from him thats comparable to Neymar while at fiorentina, hes quite a bit faster over distance though (I'd say 92/93), hes much more of a TS > ACC player to me, though his ACC is very good.. just dont see it near red.
Any examples of this insane burst anywhere (fiore days) ? There is about a dozen vs's vids on youtube, shouldn't be hard to find an example.
Top

don't have the time atm to browse through the videos as i'm on work, anyways, this is the particular moment i was referring to

he does that often during matches

Thanks, don't really see that as an example of red ACC though? I can agree with higher, yeah.. but I'm really skeptical on a global leader value. I rember ages ago.. think maybe leece days? or early fiore days you talked about his ACC being insane and I agreed with you.. but since watching him regularly at fiore I just really didn't see it. Much more TS to me.. once he gets going hes insane.
Top

I'd say that is more of a DS display in newer games.
Visit my alt thread: http://pesstatsdatabase.com/viewtopic.php?f=1011&t=25348
Top
Post Reply
170 posts