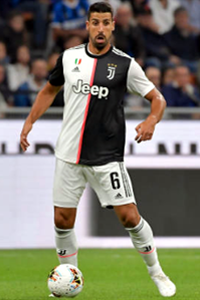 Well, I was going to post a full set on my stats thread, but I'd rather have a debate here. Let's go with the whole thing:

ATT/DEF: there's no doubt he's not such a balanced player. He tends to perform an enforcer type role at Madrid but honestly (like it was suggested months ago) he's better at the attacking part, quite better. In fact I'd put ATT at 75, but DEF cannot be higher than 70.
Stamina could be sligthly higher, 87/88 IMO. I'd personally go for 87.
He's not this good at dribbling. At all. Wouldn't put DA over 77 and regarding DS he could perfectly do with 78/79.
Passing: in terms of short passing, he's usually very conservative, and when he gets more adventurous and tries more complicated things, he tends to fuck up. 78 is the most I'd give him to SPA; SPS could sit a bit higher, but no more than 80. He's a bit better in terms of long passing, I'd actually have his LPA at 82/83, LPS isn't that good though, 81 max if you ask me.
I do not think he deserves such a Curling value, his passes tend to be pretty straight. I have him at low 70s and works quite well ingame, no need to have him higher IMO.
Technique could also go down. I would never put him over 80 and personally I believe a value like 78 or 79 would suit him perfectly, he's not a player of great technique, nothing special in terms of trapping from what I've seen.
Aggresion to low 70s as well according to his role at Madrid.
Mentality... not sure about this. Current 84 value seems to be defined by the old 'hounding' definition, Konami gave him 76 and I don't see any reason to go significantly higher. He's not a leader nor a player who outstands in difficult situations, in fact he fucks up from time to time when things get tight (got stupidly sent off against Levante early on the season). I'd have him on the mid green range (76-78).
Teamwork seems also a bit too high for my taste. Not sure about concrete values, but I do not believe he's this supportive. I have him on mid greens plus the Enforcer card to make sure he works around defensively.

Nice evaluation Xosé, if you ask me I like his default STA 88 (he is very energic on the midfield, he covers a lot of ground and Box to box isn't a bad addition for him) and AGI 76 or even 75 should be enough for him, he's a bit squared shape when he tries to defend.
DEF 68 sounds good too.

No Box to box? Thoughts?

No, I don't think Box to Box suits him right now. I've tested this set intensively (quite a lot of matches really) and with Box to Box he just becames too offensive, you see him appear around the opposition box very frequently, he even seems to be playing in a more offensive role than Özil. As far as I'm concerned he's a bit like that for the german NT, but not in Madrid, where he usually sticks to a more defensive and supportive role in midfield.

not that agile imo, could go down a few points
Top

"Enforcer" Why did u give that card to him. He is a Box to Box Midfielder who covers a lot of ground.
Every man takes the limits of his own field of vision for the limits of the world
Top

Yeah, AGI could go even lower than that.

Los Merengues wrote:"Enforcer" Why did u give that card to him. He is a Box to Box Midfielder who covers a lot of ground.

I suggest you try the set ingame before making such claims. It's true Khedira was announced as a Box to Box midfielder when he was signed by Madrid but he's displayed a different role so far.

he is more of a b2b than enforcer for me , even considering his role at NT than there is no way he deserves enforcer more than box to box card , imo
Top

i can agree with Box to Box, and i guess Condition can be down to 6.
Top

Testing now and it's true with B2B he's a bit strange playing with RM, but he's style at NT need it. Optional would be my final choice, only depend if you use more clubs or NTs.

Yes, in the NT he's more a Box to Box. But we don't rate players here according to NT performances, as far as I'm concerned. I'll add a note to the set explaining the thing anyway.

Korinov wrote:But we don't rate players here according to NT performances, as far as I'm concerned.

well Mescherano is still DMF just because he plays that position in NT , but what the hell , I don't mind having Khedira as enforcer or Mascherano as DMF

Good performance against Portugal. Showed good pace on the ball, something to keep an eye on.
I think his TW is a bit harsh though. His movement is better than this imo, would go for a 80.

he was running whole match , up and down , really positive display from him , that was b2b performance by him

Disagree with box to Box, It'd be useful for his NT performances, but certainly not for RM Khedira.

why not put it down as optional card when playing with NT instead of clubs ? that wouldn't hurt anyone