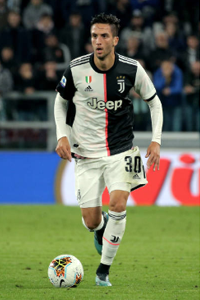 First approximation to this dude, really talented, didn't want to give him that high numbers in da/tech but he probably deserve it. He should improve some things like being more consistent and gain some muscle to be stronger because he's easily beaten in body battles. I'm not quite sure if he's the guy at the pic lol.
Top

The guy at the pic is Cristaldo. Even his name is Bentancur and he's taller than 178 cm imo.

Btw, yeah on my eyes he's no way under yellow da and bc.

He's damn weak, slow and "se engolosina" a lot with the ball. But he had a good aerial game and good distribution of the ball to build up the game.
Top

some examples about his good aerial game:

he's doing very good ATM as left CM with gago and cubas covering his back, has a solid workrate and it's a very nice shooter, very smart at picking up passes and holding the ball, needs to be less relaxed at times but he appears when it's needed.
"Imagine being this retarded @lucashag you fucking moron, you're seriously trying to write about football and think lingard is a bad player? you're a fucking disgrace, a fucking animal like very fucking south american moron" Relja's burner
Top

I feel he's got quality but he's too irelevant to the game...he usually doesn't take any risks. I'm not sure if the boca guys see the same from him...it seems he has a lot to give but he's afraid since that mistake vs san lorenzo. It limits him so much imo
Top

Vickingo wrote:I feel he's got quality but he's too irelevant to the game...he usually doesn't take any risks. I'm not sure if the boca guys see the same from him...it seems he has a lot to give but he's afraid since that mistake vs san lorenzo. It limits him so much imo

well, he does, with those shitty slow passes and with his non defensive style

he has quality and he is great to build up some gameplays but he cant play as cmf in a 433 he is to much exposed because he doesnt know how cover to his mates in the empty spaces - just look the first goal of Union - still, he is interesting to see making passes and trying. Btw he looks much better at bc instead dribbling, and probably needs some outside card or some s-card to recreate his dribbling.
Top

Can anyone update him ? He was lastly updated a year ago, his under the radar of European clubs already , they must be seeing in him a huge potential.
When di enemies ah pree
An ah bun back fire
Mi tek everythin to Jah in prayer
Long time dem nah like mi
Di tings dem transpire but Jah is my everythin an I am mek mi higher
Top

he's shit but he deserves +10 at ds and header
Top

Guys, update please! Really super player, one of the leaders of the Boca juniors, the new Riquelme. In 18 years the price on the transfermarket 6 million, and being followed by many European Top clubs.
Top

Betancourt - one of the most technically gifted midfielders in the world in his age. It works great with the ball, a sense of lightness and softness in every movement. Yes, because of the position and manner of playing Betancourt hardly a classic dribbler. But Zidane with Riquelme dribbler name was not. And techies they were from God. Betancourt is very similar to both.
Top

You don't even wrote his surname properly
Top

chamakh wrote::lol: You don't even wrote his surname properly

I hate so much his relaxed style, he can't be that cold at this age. You fucking moron. People say that he's kinda like Paredes but he isn't. Paredes despite his lazyness had really good games in Boca and scored beauty goals from time to time but above all he showed things from what is he nowadays. Bentancur is also overrated by the media and football marketing ( who is really useful to sell him in a really good amount btw, so i wont worry so much about it:lol:) but it doesn't mean he can't be a good player in the future, despite i don't see any reason to be signed by Juventus, imo his technique skills are above the average of youth talented players.

He carries the ball with such a amazing classy, hes good at trap and he has good resources at shooting skills despite has no accuracy when he uses it. Regarding his weak points i would say that hes a passive passer, doesn't worry to put passes between lines or long passes to "saltear lineas". I mean, he just gives passes to his closer teammates. Another thing i can notice is that he doesn't know how to hold the ball because he's weak and everybody can steal the ball to him - i would say it's a mix between that he's weak and he's lazy/slow at reaction for hold the ball properly against a opposite-.Btw, he does need some star and card imo but i'm not quite sure about.
Top

It seems he's sold to Juventus x 9 mill...can't believe it tbh...he's so overrated. He isn't even regular starter in Boca...there are lots of better players than him at his position in afa imo.
Top

he needs higher ds, smth like 81ish is a good option as chamakh said, he is good to start counterattacks - even i think he is the only player in boca he can do that - and looks he is a competent passer in attack but damn, cant be so lazy in the pitch, yeah he has 19 years and the media/people talk things that is not really is and you expected much more about him. Definitely his long passes isn't anything special, barely puts speed in his crosses. Also i have the impression about he is better work rate player, btw looks he carries the ball with criteria,showing nice dribbling but he is not aggressive and doesnt take risk with the ball.
Top
Post Reply
58 posts