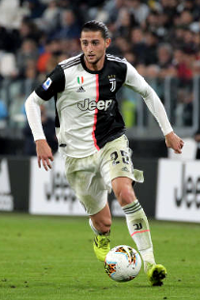 Just one thing - his Teamwork. In match against Barcelona he showed very good movement and opening himself for pass mostly times. I remember him just because of good Teamwork from that match.

And 74 is good stat, but he could get mid-high greens.
Top

Yes I know, I gave him at first a green value but I'm hesitant as he's still very young and only play 5 games with the first team.

He's moving everywhere, like the card B2B will make him on game. So I'm going with 74 to begin, may be a raise later if he has another chance to play and to prove his supportive attitude.
They have eyes but cannot see; they have ears, but cannot hear; they have tongues, but cannot speak. They are like cattle.
Top

You need to fix his WFA/WFF - he just don't use his right foot.

I have a similar set - more harsh with him TBH.
Top

Some pretty nice game as a starter for him at Toulouse. He showed powerful shot and a lot of activities in the mieldfield.
They have eyes but cannot see; they have ears, but cannot hear; they have tongues, but cannot speak. They are like cattle.
Top

he's a great passer , an all-rounded great passer i'd say , i like how he behaves when on the ball as he always opts for pretty smart moves and passes , he has an eye for killer passes too , he's a completely overlooked talent imo.

This is a pretty nice update , he's really promising and he's showing it in every performance , he passes in tight angles and supports quite well too, i use him with 81.

Insane game from him against Barcelona. Won almost every duel, crazy defensive performance, and top-level technique. The whole PSG squad was great, but he was something else.
Everyone knew it was impossible. Then came along a fool who didn't know it, and he did it.
Top I truly don't understand the 84 DA, he has never shawn such a value. He's quite comfortable with the ball but not that much in my opinion, he's not a dribbler at all. He's far away from Milinkovic-Savic (83 DA and 86 TECH) in terms of dribbling and creativity.
Top

It's a value that was set by the other french mod, Adrien, back in 2015. He could probably give you more explanations regarding the why's of this value, but as far as I'm concerned he deserves it. I personally have him rated 83 in my OF, but it isn't much of a difference really.

The thing is that Rabiot is a player that's technically extremely safe when it comes to ball retention. His physique has nothing to do with how good he is with keeping possession, he's just extremely composed and technically good enough to do it and that's why he's rated 84.

I'd like to point out that this season isn't the best to judge PSG's midfielders' technical abilities. The whole creativity thing has been switched to Neymar's side. Midfielders are supposed to help build and keep possession, this season they were all like "Let's get the ball from Silva/Marquinhos and let's give it to Neymar/Mbappé". The transitional phases between attack and defense in this team really got worse since the signing of Neymar. Mbappé is more of a team player, so I don't blame him for that, but Neymar really tends to "vampirize" the ball a bit too much.
There's also the fact the team is far less possession-based under Emery. They tend to have superior possession because they're technically dominant in their league and they're used to play a possession game, but Emery tried to bring more verticality in the team, resulting is much, much less time on the ball for the midfielders like Rabiot. This is also one of the reasons why players like him didn't show their whole technical ability this season.

Same thing could be said for Verratti, Draxler or even Lass Diarra who's also known, to a lesser extent, for being comfortable on the ball.
Everyone knew it was impossible. Then came along a fool who didn't know it, and he did it.
Top

Exaclty the value came from Blanc era when PSG was all in ball possessions. Every time Rabiot played we saw Motta in his game. Really great at ball retention and past opponents and close range in the mieldfield before finding a partner in good position to keep ball possession on the team.
They have eyes but cannot see; they have ears, but cannot hear; they have tongues, but cannot speak. They are like cattle.
Top

Okaye he's arrogant, and might break a bit his career development when he go on clash with Deschamps before the WC, or when still he refuse to sign another contract at PSG. But he's so pure class. Very high technical skills, nice vision and a lot of cover on turf to build the offensive actions or steal ball while helping back on the mieldfield. The thing I like with him, when you watching him, it's so clean, looks so calm with the ball and makes football looking beautiful.
They have eyes but cannot see; they have ears, but cannot hear; they have tongues, but cannot speak. They are like cattle.
Top

Atrocious decision making against Liverpool. It's like he just forgot how to play football. Not gonna discuss a decrease over one failed game though.
Top Well, we will never see him again with Paris

Very difficult year for him, between the clash with France NT and his end of contract. He is hated in France now but he can still became a world class CM if he works hard and stays focused on the field. Maybe he should change his agent toi (it's his mother and she seems to have a bad influence on him)

I think that he deserved a downgrade in response maybe to high greens, 81 is a bit high for him. When his team loses the ball, he often looks lazy and doesn't make many efforts. I would give him 66/67 in MENT for the same reasons
Top

He brought this on himself really.

Agree with the suggestions anyway, also lowered teamwork a bit, he became a bit worse in this aspect imo.
Everyone knew it was impossible. Then came along a fool who didn't know it, and he did it.
Top

This guy is the good example of what to do if you want to waste your talents. Not even sure he'll succeed in another leagues. His behaviour and mother will not change.
They have eyes but cannot see; they have ears, but cannot hear; they have tongues, but cannot speak. They are like cattle.
Top

Jurgens gave him a general upgrade in March but he didn't play one single game in 2019.

Kim wrote:Jurgens gave him a general upgrade in March but he didn't play one single game in 2019.

Kim wrote:Jurgens gave him a general upgrade in March but he didn't play one single game in 2019.

83 would be a more adequate value for his short pass accuracy. Paredes is a way better passer than him, Rabiot very often opts for a no-risk pass and didn't demonstrated anything close to high-80's.
Top
Post Reply
22 posts