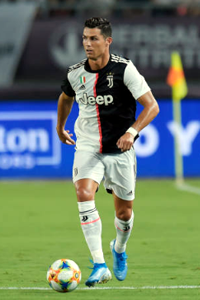 700+ goals in career as a second striker or wide forward

Whoah10115 wrote:I mean, all that absurd selifness is at the root of why he's obscenely overrated, but he did not try to steal the goal yesterday.

he absolutely did, see how he closed his legs when saw the ball was coming to him? he wanted the rebound though he was offside, probably because he reminded how Nani stole his.

I think he did not want to steal Dybala's goal

He certainly knew he maybe was in offside
Top

his body balance should probably go down to his classic 77. He's easily pushed to the ground by the opponents.
His agility is in the 77-79 mark and his pace suffers very much of the lack of acceleration. He can still get a decent pace but needs space and ground to get it. More like TS 85 ACC 80.
His response is still bad. He's still very aggressive and always finds the good position, but he has missed several easy tap-ins by simply having a bad timing.
Top

I hope you watched him against Lazio, against Bayer Leverkusen and today against Udinese

In that period in which he made bad performances he was really partially injured; in these last weeks he did good training sessions and he seems reborn on the pitch His speed/acc in the second goal vs Udinese was great, I wouldn't say he still deserves higher values like orange but 84/83 seems a bit low imo and his WFF could be 7.
Top

The second goal was mostly about his attack, no way in hell Cristiano Ronaldo has an ATT value lesser than 97. He's better than Lewandowski.
Top

Today against Sampdoria he scored a wonderful header goal, with an absurd jump

I tried to take a screenshot during the slow-motion replay, because he was in the sky
Top

I've just paired them with the classical set
Top

I don't think CF is the right main position for him

SS is the best choice for the way he plays

He don't usually fill the box, and he likes to play WITH a classic CF
Top

AdAc wrote:I don't think CF is the right main position for him

SS is the best choice for the way he plays

He don't usually fill the box, and he likes to play WITH a classic CF

I agree. It's part of why I find him overrated and why his TW should be even lower. When he takes on responsibility of being the striker, he scores less. Partly because it's not his position and also because he follows the striker's work. Not all of that is a criticism, but some is.

He has been great last few games.
Top

He has found a very good form. He started running with the ball again, with his efficient runs and very precise ball touch. Speed and agi look again like his former levels. Also, his dribble speed is tricky. He still can do very decent runs with the ball by now.
Top

What does he have to do for demonstrating that he just had a bad period because of an injury?

Stamina and form could go back to better values, and keep an eye on his speed and acceleration

I would suggest:
84-85 Stamina (in the end of the matches he still runs and sprints)
86 Top speed
84 Acceleration
6 Form
Top https://youtu.be/Uq0tu0hdM6Y
Great goal today by the best in the world
Top

CR in the only light in this bad period for Juventus