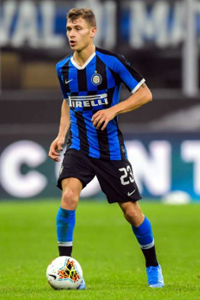 Stamina should easily be orange
Top is he a kind of typical spanish midfielder? high sta - tw - dribble - agi? Yesterday came in as a sub and changed the match - he's clearly Inter's top midfielder.
Top

he shows high stamina & TW against Madrid , he support a lot vidal , this one he lacks many qualités in term of timing & reading of the game in tackling and BW , but Barella was BW und builder in same time , he was in every place , the only player that he run more KM in the game , for that i suggest 93 Stamina & 85 TW
this conclusion it's after many games of him a real B2B
Top

I'd add him backheel card, proven good use of that in different serie a seasons (and vs Madrid)
Saving Private Adrian

according to uefa statistics below, nicolo was able to cover more than 70 km in the 6 matches, with an average of 11.7, this is the longest distance covered in uefa
in comparison with kimmich he played 3 match with 35.2 which gives an average of 11.73

I'm positive he will become one of the best CMFs in the world if he isn't already.

I wish I could find footage of his games to play them at 50% speed because I'm pretty sure we could see a lot of interesting moves from him off the ball. I'm saying that because his intelligence and anticipation are absolutely insane, he already knows the the right thing to do before he even has the ball and he's always one step ahead of his opponents. On that goal vs. Juve where he assists Vidal? I think with a cross from the left wing, he's basically outsmarting Frabotta hard (which isn't saying much in hindsight because wtf is Frabotta doing, defensively speaking?) but even when it doesn't seem to pay off, he's smart enough to hold the position and keep this advantage even though the play seems to go against it, and it pays off.

His performances seem to be full of smart plays like that.

On a more game-y aspect, I like the pace in his ground passes (higher sps?) and his TW seems insane, oranges for sure, reds might be pushing it. It's a tricky one because the sheer quality of his support is very high. The amount, not so much, actually way below what his energy levels imply.
His technique also deserves a shootout, very clean traps all around. Also, heel passes are clearly his signature move and he needs the card.
Everyone knew it was impossible. Then came along a fool who didn't know it, and he did it.
Top