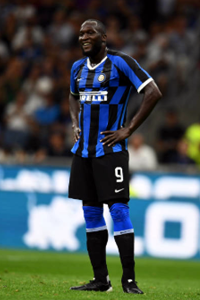 I gave 5 different examples. How can we use one rule for one player, but others for others. It is complete and utter nonsense. Lukaku is clearly underrated on here.
Top

I'd rather we gave him a lower form, then nerf his set down so heavily. Paddy, could you suggest some values you think are under-rated? It's really hard for me to judge things like his SA as I do not watch him consistently, I am sure on his intelligence and danger levels though.
Top

These were the stats I disagreed with:

I'd personally have him around:

We've agreed on his crossing.

His placement is better than his technique, he's one footed so a lot of people base their views on his technique and poor finishing on his right peg

Could I add some suggestions as well? Especially on some that Paddy highlighted

BB 93 (why did this get downgraded? He bullied Kola a couple of times)

LPA 79 (80 even, his crossing from the right wing is scarily good, if he got the service he gives out he'd have more headed goals)

SA 84 although I seem to remember championing 86 when I first arrived here. 85/84 is fine though

SP 88 was fine, not sure how this got downgraded to 83 in the first place

Also I don't have the clip on me but I'm sure a lot of you will know what I'm talking about, Chadli's goal against Japan was made possible by Lukaku's intelligence and awareness of his surroundings and his teammates movements. He always does this little stuff but goals don't come of it so it doesn't get highlighted, I'd give him 74.
Top

Paddy wrote:These were the stats I disagreed with:

I'd personally have him around:

We've agreed on his crossing.

His placement is better than his technique, he's one footed so a lot of people base their views on his technique and poor finishing on his right peg

while i agree with the downgrade, i also believe it was really harsh, but needed. we need to have updated sets to current players behaviors on the field and it's obvious Lukaku is not fit nor United take the best from him for a while.

taking into reference "games where he demolished people" these can be taken into account in a classic set? i think it's fine representing the actual player by the main draft and then have individuals for record breaking seasons
again, i do think this update is harsh but the values you and godsplan are suggesting are really high also, i'm looking more for a middle point between both of you, Relja is not the best explaining things when he dislikes or really likes a player and you're not understanding the new proper ways of rating players.

if a player can't use his body properly, if he got fat, if tactics don't give him any justice there are ways to represent that in a set, and if a player was good and then benched or turned unfit, like this case, he should have a downgrade on form for a while and if that player keeps underperforming then go for the downgrades while keeping his classic set, just like Sanchez too. his set was raped and it could've been even worse tbh.

values should be discussed, and i'm sure that Lukaku was never in his career a green ment/tw player, at least for new standards mean. he's fairly rated low because he deserves those values and i agree on them, while having these stats low he also needs proper values on his main attributes like att and bb.

i tried to take down a bit the values you guys suggested and added a few more to feed this controversy.

he could also get whites for da and lower tech, he deserves these ratings and we should treat the players for what they display even after years of not touching the set or just making minor adjustments on form and details.
Top

scored 2 goals today to comeback from 1-0 against Southampton, both goals with his right foot and having really good placement

also, he didn't even flinch against this tackle from Bertrand

Yeah this whole downgrade story is pretty much bs, with Form being on 4 he should have his old stats brought back. On top of that, he is yellow SPA/SPS player to me, that pass to Lingard vs Lpool was pure gold.
Top

Luhum shouldn't be allowed near Lukaku's set, what an absolute joke this thread has become.
Top Lol, glad to see his points are back xD. That's way more like Lukaku. Nicely done you guys

(Off-topic) Nice rework on the DP/BW from the defenders as well, these stats were looking kind of weird and too low in most sets. We need to give it a check on the GK's stats as well imho. Good job anyway o/
Top

another two vs PSG

Spoiler: show
While his teammates wheeled off in wild celebrations Lukaku took a moment to console Presnel Kimpembe

His mentality and teamwork are still way too low.
Top

Good to see he's gradually improved his footwork with his weak foot over the years; at least it helps to be a little less predictable with his usually one-dimensional style of play.
"Willy Wanda is Chinese!!!"
Top

His stamina has always been noticeably poor, I don't think he has ever been yellow here imo. It has been even more obvious this year since he has put on weight and has had fitness issues all season. For instance against Chelsea he made one sprint early on in the game and was knackered for the next 30 minutes! He often just conserves energy for attacking movements, which is why his defensive contributions are so low.
Top

I think he should have wf as a position or maybe ss at the very least? He's been put there by Martinez a few times and also against arsenal this season in the fa Cup and got a few assists

At 2:30 he assisted Lingard by crossing from the right side
Top

Great debut from him, quite supportive, made some nice runs and absolutely dominated players physically, some sloopy low speed passes though which gave the ball away quite a few times, he needs to work on that. Looking forward to seeing more of him in inter.
Top

jurgens wrote:Great debut from him, quite supportive, made some nice runs and absolutely dominated players physically, some sloopy low speed passes though which gave the ball away quite a few times, he needs to work on that. Looking forward to seeing more of him in inter.

Also that he always seems to have the same one problem, that he is back to goal keep watching and just waiting for a pass to land to his feet, but he doesn't make the move towards the ball so that he can collect the pass earlier, so that an opponent doesn't intercept it, steal it and go on a counter-attack.
Top

Hes very good at making the right move, very intelligent, but his body seems to let him down far too often. Heavy touches and awkward movements, hes playing support to Lautaro, quite far back, but he looks uncomfortable. His heavy touches and akward movements are really troublesome, it's quite odd that hes being forced into relying on them to create, rather than playing upfront and having lautaro, whos extremly comfortable on the ball and playing support, playing for him instead. Though he is quite good on his feet for a big man, his ability to be good on his feet when its needed isn't reliable at all. For these reasons, I think it's time we gave him a much, much lower agility, and possible all round stats to reduce his fluidty. Again, playing well, very intelligent, just his physique or lack of reliability in his technicality lets him down.
Top

should we act on passing acc/speed to recreate his sloppy and uneffective passes?
Top
Post Reply
314 posts