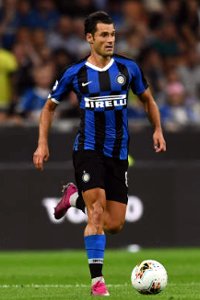 he played CMF in every club he was before, the only exception was lazio. and those clubs were udinese, cesena and juventus, he's very capable of playing the role and the 3 managers which put him there apparently though he was good in that position. i doubt that he'd be forced to play a position which he "sucked".

Ricky wrote:CMF is not needed. He last played there with Cesena. Since he's a Lazio player he's SMF*, AMF, WF (both sides, but mostly on the right)

I disagree... He is still able and plays a CMF sometimes. Against Spain, he was a RMF, but was playing a lot in CMF also... In Lazio, sometimes he plays CMF, but because of great players that team has at that position, he now plays at RMF... He still can play CMF very, very well...

Here is the fantastic penalty against Spain.

"However, Antonio Candreva produced the most intrepid performance of the evening. The Lazio winger was involved in a lot of Italy's best attacking moves and never once turned down an opportunity to run at the Spanish defence. His stamina was also astounding, Candreva earning his side a free kick in a dangerous position in the second period of extra time with a fine run down the flank.

The highlight of this coming-of-age performance, though, was his penalty. That he accepted the responsibility of taking the first spot kick in a semi-final shootout against the reigning world and European champions was impressive enough. "
www.mvp.rs
Top

top speed: 85 - I think that he deserve something more..
mentality: 78 ? - Only the most brave players are able to do the "cucchiaio" penalty kick.
Top

And another "cucchiaio" against Sampdoria

MENT has absolutely nothing to do with bravery, and especially not what you mentioned. Read what stats mean before posting such comments...

Today against Uruguay, he is playing at CMF position, so there it is, no need to talk about this anymore, he is still capable to play at CMF position, he can play anywhere in the middle...
www.mvp.rs
Top

Mentality
Mentality is how well a player deals with adverse situations. Mentality also effects Stamina. Players with high Mentality will not be as effected by depleted levels of Stamina.

During the penalty kicks Italy was losing the match, but after the "cucchiaio" of Andrea Pirlo something changed, like he scared england players and in the end Italy won. I guess that it was a big demonstration of mentality, as Antonio Candreva did against Spain. But probably I'm wrong.

What do you think about the speed instead?
Top

..and in the case i'm totally wrong about the MENT, don't you think that after the "cucchiaio" penalty kick, he deserve more than 77 in shot accuracy?
thanks
Top

mr.Boss wrote:For me his Stamina is 90,i'v seen him a lot this season,he run a lot for all 90 minutes ,90 is deserved from him imo.
TS should increase 1 or 2 points,i know J.Alba is faster then him,but against Spain Candreva looks so fast,higher then 85 IMO.
And what do you think for his BB? For me he is a bit higher then 78.

Totally agree with everything... He deserves a higher stamina, 90-91 is ok i think... In Confed Cup, he looked like he could play another game after semi final loss to Brazil, even thou he played for 120 minutes. I was also saying that his TS needs to be higher, he had really nice duels with Alba, and it was obvious that he is faster than 85 (87 maybe)... I think that his BB could go to 80, is pretty strong... I think that his TW could also go a little higher, he really follows the game good, always making good decisions and good passes... Even his respons should go a little higher i think (maybe 82), he collects a lots of loose balls, and has a really nice reflexes...
www.mvp.rs
Top

Became today Lazio's recordman in goal scored by a midfielder. He's playing constantly as WF now though, might he get that position as main the one?
Top

well i'm not a big fan of changing natural positions, but if you feel so, do it, it's no harm done.

He needs * Penalties cause he have scored o lot of them in the last 2 seasons , but notably this season .
PMTP & Mia San Mia
Top

Candreva is that player that make u said "man, this guy those everytime exactly what he has to do". Lately he has become a beast in desicion-making at the pitch. Just wanted to point out that his attack skills are a little bit underrated for me, cant understand how in earth he is behind Xavi in this attribut (who i think is overrated, but still he has become a real threat to the opponent for almost the whole match). At similar roles, cant understand how is that Candreva is below Alves. I mean, if i were a Lazio or an Italian player, i would just make the pass to Candreva, and i would bet that he would convert that pass in an amazing shot, and amazing cross or some run carryng great threat.
Top

He's finally receiving some kudos after years of playing very, very good. He was one of the best yesterday, agree with you when you say he knows always what he has to do, much smarter than Balotelli at times

He reminds me a bit of Ronald de Boer.
Top

Fides wrote:He reminds me a bit of Ronald de Boer.

Candreva is not so good. Absolutely his DA and LPA are OP. Pogba's DA is certainly better than Candreva's one.
Top

explosive23 wrote:Candreva is not so good. Absolutely his DA and LPA are OP. Pogba's DA is certainly better than Candreva's one.

Bollock of the month. Pogba is not god, and they don't even play in the same position. So what's the correlation?
Top
Post Reply
121 posts