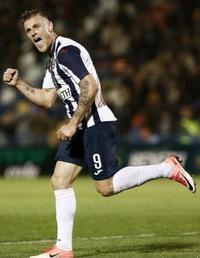 how is he doing, he is the Ex-Sunderland no ?
Top

Yeah he is, scored 23 in 43 for Hibs last season and forced his way back into the Republic of Ireland NT.

Won the SPL goal of the season for this strike against Rangers.

Yeah, he's a very good prospect. Hibs will do well to keep hold of him this summer.

I've not heard of any interest.
Top

There was an article in the Sunday Post a week or so back linking him with Celtic.

This is the article:
NEIL LENNON wants to hand Hibs star Anthony Stokes a second chance to join him at his boyhood love, Celtic.

In 2007, the 21-year-old rejected the opportunity to play alongside the current manager-in-waiting at Celtic Park.

He opted instead to take up a bigger offer from Sunderland.

It was a decision that saw him branded a money-grabber by Hoops boss of the time, Gordon Strachan, and one which went disastrously wrong as he clashed with Roy Keane at the Stadium of Light.

But now Lennon, set to be confirmed as Celtic boss in the coming week, is ready to offer Stokes a second chance to join the Parkhead side.

On international duty with the Republic of Ireland last week, Stokes spoke of his regret at having put money ahead of his career.

He admitted he had been wrong to turn down the switch to Glasgow’s East End.

That prompted Lennon to instantly add him to his list of summer targets.

He’s been a big fan of the player’s natural goalscoring ability ever since he first joined Falkirk on loan from Arsenal as a teenager.

Lennon knows because the striker is contracted to Hibs until 2012, he would have to pay £2 million-plus to get his man.

Would be great to see him at CP.
Could form a great scoring parntership with big RaRA, I'd put Fortune at 3rd.
Top

Would be a cracking signing for them imo.

Big J wrote:Would be a cracking signing for them imo.

Totally agree. Punt Samaras and get him signed.
You're a member of the toon-army right?

Yeah mate, Celtic are probably my second team though.

Great, watched a lot of newcastle-matches a few years back, great to see them back.
I've heard Newcastle is interested in Samaras?

I agree with you regarding WFA/WFF.
Aye, I saw it on Sky Sports, very strange.

Seems to be closing in on a move to Celtic.

He's such a poacher, if we're to add cards he could easily warrant Goal Poacher. His attack could even come up a point if you were to ask me.
Top

Just noticed his attack is rated the same as Samaras. Stokes definately needs upped a point or 2, personally I'd say 83 based on his Hibs days, easily the best poacher in the SPL since McDonald left.
Top

I'm was thinking 83, but I'd rather be conservative at the moment. What do you think about Balance?

I wouldn't class him really as a strong player, he can hold off the like of Whittaker, such as in his goal against Rangers, but I'd say that was down to him reading and reacting to the ball first and catching whittaker unaware.

I cant think of a time right now where I've seen him hold his own against defenders using pure strength. Usually it's a case of backing into them, knocking the ball on then using his speed to beat them.

For now I'd say an 80 is fair or 81 at a push. Now he's a celtic player it'll be easier to judge his play week in week out once he's given a run off games.
Top
Post Reply
71 posts