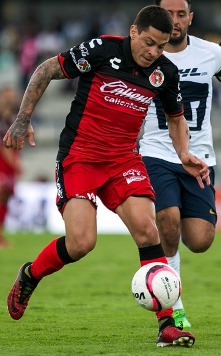 At last, he convinced himself that he has nearly no chances to play for Argentina...
He's switched football nationality to Paraguayan:

Vickingo wrote:His season is far from being good; yeah, he didn't play that much but it has to do with his constant poor performances. What does Rudi expect from him when he comes from the bench? Being explosive, fast and use his speed to assist or score. Well, he had done nothing of it this season and is worrying. His form 3 describes him.

1 year and a half after, a loan to EPL in the middle and he keeps being shit. I mean the stats make him a really dangerous winger and he's quite the opposite of that. I didn't look for his recent stats in games, but he must be the player who loses the ball the most I can think of. It's like he doesn't know how to dribble and he just goes forward using his speed, quite brainless. He's not useful at all...I mean, El Shaarawy looks smarter than him and you know how idiotic he could be at creating opportunities or go with the right pass/dribble/shot. Even in today's game against a really awful team (looked like a 4º division team tbh) he couldn't do anything well...he's a losing the ball machine.

I don't want to be harsh with him cause I want him playing better but man att/da/spa/sps(!)/sa/tech look massively overrated atm.
Top

One of the most annoying players ever. Talented a lot, but simply RETARDED. 9/10 decisions are terrible
Top

IMHO There is no need to have him with this current numbers, surely he is still talented as fuck but with his ACC AGI DS combo he is totally a beast in-game and that doesn't make any justice to what he deploy in field this last months.

He still keeps that insane AGI but he is far away from been close to red numbers, with 90/91 you can represent his current level in game.
Top

Given him an update
Top

Couple brief notes o him, the DS I am not sold on as he seems to slow down quite noticeably when dribbling. Also, his SP is quite good and might be 82 or so as he puts a lot of power behind his shots and more blasts them past the keepers than anything.
Top
Post Reply
127 posts