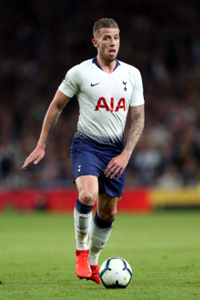 I think his LPA and LPS could even be raised a little bit. I am not sure about his STA being this high. I feel 82/83 would be fine aswell. Mentality could go up to 79/80 aswell.
Top

Fides wrote:I think his LPA and LPS could even be raised a little bit...

I'm impressed with the long pass quality of both CB's of Ajax.

As spinaL said, Toby reminds Piqué a lot. Send the ball forward a lot and with higher precision and pace. I would put him on pair with Piqué or Toby even higher. So I go for:

I agree with it.
Top

updated with the suggestions
Top

P11 – Long Ranger wouldnt be strange for him after the goal vs Milan and Feyenoord.
Top

Don't forget he has a pretty high ST rating already.

Well the current stats make him useless from distance. I feel he is a better long ranger then any Ajax player apart from Vertonghen and De Jong (and Sulejmani also can have a good shot from time to time), but at the moment even Enoh has better shooting stats:P
Top

If anything, his shots are more powerful than these numbers suggest. But he doesn't score regularly enough from range to demand the card.

Also, Enoh is way overrated in some areas. Great defensive midfielder but he brings far to less offensively. Somebody once said Sissoko would rob the ball of an opponent and gift it right back against with a bad pass or a horrific first touch. Enoh is, unfortunately, for now the same kind of player.
Buon compleanno, il pibe d'oro.
Top

What if we changed side in R. Will the AI put him more as a RCB? He only plays as a RCB, so I think side should be R.
Top

Well in the newer versions of PES I dont think you cant actually give somebody who just has center positions (CB, CM etc.) a position anyway:P He did play SB for the Belgium team I think though.
Top

To be honest, i Think Alderweireld has a better response and defence then Vertonghen.

Defence already higher in the stats. But i think that response is as well.
Sporting Clube de Portugal meu amor / Working on new sets and updating Liga Sagres
Top

Agree. He was out-muscled by Vlemickx quite often yesterday btw. Haha, I am also not sure what that box-to-box card is doing there lol.
Top

Disagree on his Response being better than Vertonghen's. Mainly because Response does not solely influence tackling and taking the ball off another player but also reading of plays and intercepting a pass. Vertonghen is a brilliant reader of play and his tackling is also better than Toby's, I feel.

Toby has one advantage over Jan though, and that's the fact he's a natural defender. His defensive positioning is way better, allowing him to pick up strikers in a more composed manner and showing them to the wrong side more often than Jan does naturally. Vertonghen is stronger than Toby though, and combines that strength with crunch tackling and world class ball-playing abilities (for a central defender) due to him being a natural midfielder.

As for Toby losing out to Vleminckx, keep in mind Vleminckx is a very determined forward (high rating for Mentality) and Toby had only just returned to the squad previously to this game. I think he did pretty well, considering he was coming back from an injury.
Buon compleanno, il pibe d'oro.
Top

Mainly because Response does not solely influence tackling and taking the ball off another player but also reading of plays and intercepting a pass. Vertonghen is a brilliant reader of play and his tackling is also better than Toby's, I feel.

I think that Vertonghen maybe reads the game a little better, i doubt it but maybe!
But intercepting and tackling, especially tackling. No way he is better then Toby. Imo. Toby isn't only better at positioning, he is a far better blocker and interceptor of the ball and tackler.

Not many people agree with me i know. Because Vertonghen looks more freatning then Alderweireld because of he's physic, people assume that he is a better defender.
But Toby concentrates and does he's job. when he doesn't play the Ajax defence looks less organised. The reason that Vertonghen is more like able here in Amsterdam is the fact that he rushes often down the center and scores a lot of 20-25M shots. Dutch favor attacking-style. And imo lack the vision (sometimes) to see when a real defender is a good player in defending.

Just an example off topic: a lot of dutch here in Amsterdam find Van der Wiel one of the best right backs in the world. Just because he can control a ball and makes forward runs. They often forget to be a world class right back you need to defend as well. Plus ofcourse deliver good forward balls witch imo he doesn't.
Sporting Clube de Portugal meu amor / Working on new sets and updating Liga Sagres
Top

Maybe we should lower his MENT. I feel this is one of Toby's weak points. Despite fierce looking tattoos and haircut he seems to lack the real winner mentality which is needed to become a top defender.

edit: and the timing of his (defensive) heading should improve as well.
Top
Post Reply
118 posts