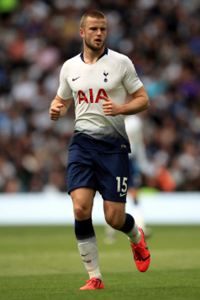 Spoiler: show
Eric Dier moved to Sporting CP from England when he was seven years old when his mother was offered a job working in Portugal during the 2004 European Championships. His footballing ability was spotted by his school's (International Preparatory School in Carcavelos) P.E. teacher who referred him to Sporting scouts. In 2010, his parents returned to England and Dier remained in Portugal, living at Sporting CP's academy. He is the grandson of Ted Croker (former Secretary of the Football Association and President of Cheltenham Town) and great nephew of Peter Croker who both played professionally for Charlton Athletic. His father, Jeremy is a former professional tennis player.
In January 2011, Dier agreed to join Everton on a short term loan until 30 June. Sporting CP's official website stated that the loan was "an opportunity for the athlete to grow in a more competitive and demanding environment". (Wikipedia)

Eric Dier is both fluent in English and Portuguese. Dier had been approached by the Portuguese Football Federation to play for Portugal but only could do this once he turned 18. Eric Dier never made it a secret though that he wanted to play for England. And is now capped for England U19. His favorite (English club) is Manchester United.

Dier is fast becoming one of the most important players in the England side now. He's barely put a foot wrong since coming into the international set up and has been by far and away their best player at the EURO'S so far. His covering and protection of the defense have been pretty much spot on with little error. It's allowed England for the most part to know that they now have someone who can play that DM role without having to resort to shoe honing players into that role who wouldn't have the same awareness and ability to shut out potential danger to the back line.

by jurgens
I don't think hes anywhere near this def or resp, hes not especially good at either really.

by KeyserSoze
He's still a RES>> DEF player anyway. I suggested RES around 82-83. He had 83 in the previous update if I'm not wrong, and I think that's the max value he requires. Cannot blame with slight lower DEF anyway. He had around low greens in the past, and that was okay and sufficient.

The rest of his technical stats were properly upgraded over the recent months.

by BigStu
agree, not been that impressive this season, his defence is the same as when he arrived at spurs as a CB, I've lowered it to 74, alao reverted res to the value it was before

by Twix
Side: R (he seldom played at the left - only in youth soccer for "Everton-U21" and "Sporting CP B" when positions on which he then was able to play best of all (CB/RB) have been occupied by other players, in a midfield the first Jesualdo Ferreira in the same 2013 began to use him).

by Rex
I think the early cross card would suit him much better than a pinpoint pass. I mean, at least when he play as a DMF, he's really crossing a lot from the right half space.

by false 9
I think he's a more assured short passer than these stats suggest, he rarely turns over possession in terms of short passing and regularly shows good accuracy. He's generally conservative in his distribution but he's shown he can also play more penetrative passes from deep

I would consider something in the range of 80-82 appropriate

by pcrooce
after reading paddy on Kompany's thread i actually agree with Dier being stronger than the actual value.

a few tweaks could also be done like lower than 70 att prowess, green curve, white acc and a little less stamina.

by Whoah10115
Agree his BB should be higher than 86, but not as high as Kompany.

His Agi has to drop. He's stiffer than this. He has fluidity. Think he could be a tad slower, but maybe it's the Agi that makes it look that way.

And his LPA...LPS can be higher even, but accuracy? He tries them a lot and they're always decent but not accurate enough, so giving him 85 is really giving him credit for trying it a lota and not sucking, and without pressure.

Whoah10115 wrote:Agree his BB should be higher than 86, but not as high as Kompany.

nah, he's not worth oranges at all.

Whoah10115 wrote:Agree his BB should be higher than 86, but not as high as Kompany.

nah, he's not worth oranges at all.

by josev
i think he appears stronger than he is due to his stature, i'd value him at 88-89 max, and i've updated him to 87 yesterday which is more than fair for me. wanyama is defnitely stronger tham dier and i intend to give him an update when i see more of him after his very long absence caused by injuries