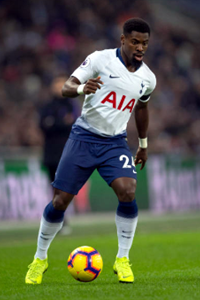 I guess FFP is an idea of club like Madrid, Barca, Man Utd, to not make rich people buying club and put their interrest in danger^^
It's just a struggle between old rich against new rich^^
They have eyes but cannot see; they have ears, but cannot hear; they have tongues, but cannot speak. They are like cattle.
Top

Probably it's about income and revenue. Obviously PSG doesn't generate income as big as Manchester Utd, Real or Barca, because their fanbase is couple times smaller (yet?). Therefore they can't spend as much as those 3 clubs.
Top

I wasn't speaking about this. I mean that Barca, Real etc have big debt... they never try to put the money of the income to cover the debt.

Anyway PSG have big income, far over Man-City for example. Paris is the biggest city in Europe with London, they always had a worlwide image and sold a lot of shirt, TV right, etc... I read an article some months ago and PSG was the 5th club in the ladder in Europe for income. Only Real, Barca, Munich and Man-United have better income.

With this FFP, they aren't allow to buy a player like Aurier for 10-15M€ value. So they took him on loan to buy him next year. Barca bought Suarez for 80M, Mathieu for 20M, and they lie on the transfert of Neymar, wich is a big issue for justice and law. Company who do this in real life can be closed or pay a lot of money to the justice for this.

PSG and Monaco aren't on the same planet. PSG have big income, that's why the owner choosed this city. But at Monaco you will never be able to have comparable amont of income.
They have eyes but cannot see; they have ears, but cannot hear; they have tongues, but cannot speak. They are like cattle.
Top

Sometimes (or even often) debt is cheaper than company's equity (both equity and debt have their cost). Debt isn't a bad thing when you are able to pay instalments and interests. It gives you opportunity to invest and to grow way faster. Both sides get profits. Cash flow is most important, ability to pay salaries or cover current liabilities. Long-term debt is less important especially when it's on good terms

.
I didn't read carefuly FFP rules, but I just don't like when some ridiculously rich people from mid-east or eastern Europe come and buy a club and try to make it an European Champion in 3 years. I'm just waiting until some rich guy buys the name of his own club stadium for 500 mill a season, lol. It's still a revenue...
Top

That's exactly how (financial) leverage works.
Of course, the profits will multiply when properly managed.
But these techniques are also a double-edged sword due to their risk.
That happens, for example, when the cost of borrowing an asset is much larger than the income caught by the same asset.

That's why the common, "ordinary" clubs have a broad amount of investors, because the eventual losses have a lesser impact over them.
That's not the case of PSG and their Middle East tycoons, specially after the reasons fitzcarraldo already gave.
"Willy Wanda is Chinese!!!"
Top

I see one of his positions is WB, is it possible that we still have WB position on this forum?

May be a few more points in Jumping? He is insanely good in aerial duels.
Everyone knew it was impossible. Then came along a fool who didn't know it, and he did it.
Top What a beast. He deserves a orange value for STA. He's also very powerful.
Top

His first season was difficult at Paris. But now he's showing what he did at Toulouse where he was the best right sideback of the league by far. Now there's no way for van der Wiel to come back a starter.

He's impressive. The only thing I'd change from this set is his RES. I don't want to overrate him and I know he's already at green DEF, but shouldn't he be at yellow RES? Every time I watch him he tries to press the rival, pushing forward, always trying to anticipate and tackle. Sometimes this ends in a foul, but anyway his RES doesn't look so conservative to me. Similar to Alves, only that Aurier is by far a better tackler. Maybe Alves is just a little more responsive (and also there's a huge gap between his DEF annd RES that is already well represented in his set), but I think Aurier should be closer to him. Even if I compare him with another type of RB as Zabaleta (who is at yellow DEF), their tackling doesn't seem very different... Zabaleta is better, sure, but discussing RES only, I think they're pretty close, if not at the same value. But an 80 to put him in pair with Azpilicueta would be fair too.
Top

His jump is insane, probably close to reds. I question his offensive side though, I don't think hes really that good in spa or lpa, spa for sure, but not entirely on lpa... he seems to just hit the ball and hope for the best sometimes, but other times he seems to aim and pick out people... either way I don't feel hes this high in lpa. Def is deserved but I don't think he warrants this much attack, at least for his PSG displays.
Top

he's a monster, what a player
Top

I'm not convinced with his EP, most of his movements are pretty stiff, the number he had before (78 I think) looks much better for me. The rest of the set is perfect.
Top

What a dumb player defensively. Flying into tackles all the time, even with yellow card. He's a good tackler, can pull out some really nice interceptions, that tackle on Arnautović was incredible, but has to play much smarter. It was so obvious that he was going to get a red card.
Relja's not dead
Top

It's a shame because I watched the game yesterday and he was having a really good game until he got sent off.
Top

i mean, he's one of those super aggressive players that play without 0 hesitation, physically he's a monster, even tactically, but his brain has been the issue for him throughout his career..
Top