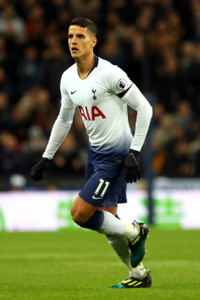 Im a fan of River, i watch him all your match and i did much post to him, and i said to Vickingo he has future in the Argentine Selection when he debut in River, and know has been convocated for Sabella to play vs Suiza, i said it, he is impresionand, and they compared it with the pato Rodriguez jaja totally wrong, Rodriguez stay in Independiente in a poor team, and Lamela is called for the national team, and i said this when he debut in River.
Top

his SPA can be 83 or 84, and his DA could be little higher too as well as his TEC.. he rarely misscontrol a ball.. and he usually starts the matchs playing as a Right WF or something like that..
Top

that could work fine.. sorry, i said it wrong.. he uses to play as a Left WF
Top

Guys he defenetly needs a global update, he is playing very well and this set is from beginning of the season so i think he can be updated after having seen his performances
Top

he doesn't need a new set, jesus, stop going through the forum and suggesting that everyone needs an update and a whole new set just because they're playing good...haven't you thought that the current set may represent him correctly? have you even tried playing with the set to see if it fits him right before going around and yelling "PLZ update needs higher xy" or "he's playing good whole season he needs a new set" either start making some sense and providing proper arguments or don't post things like that anymore.

The more I see him play the more I think the set is appropriate to his characteristics...I even think it is too generous in some aspect, tonight against Genoa he got dispossessed many times and lost a lot of balls, I don't see for now his skills higher than this...
Top

Lamela needs to learn how to control himself and his actions ffs. the guy spat on Lichtsteiner for absolutely no reason, that is, after a normal shoulder-to-shoulder tussle. he was already involved in fight with Osvaldo, kicked Chiellini in the balls and now spat on Licht...

There is no excuse for Lamela if he really spit on him, but it was shown everywhere that before the swiss "gentleman" made fun of him showing with his hands the (well deserved) large result in Juve favour, provoking his nerves...
Top

definitely no excuse for that just like you said, but Licht showed the "Totti" 4 fingers (

čale wrote:definitely no excuse for that just like you said, but Licht showed the "Totti" 4 fingers (

I think at that minute they were showing replays of what he did previously...and he should not be allowed to repeat that

yep it's probably a ex-laziale revenge

where do you think zeman will make him play, LWG or RWG? i would say RWG since he is left footted.
Top

he's a good dribbler,i think his dribble acc could get 87.
Top

He needs turning skills, seen him do ronaldo chop a few times. Also his DA is better than this, 86-87 imo. And seeing him just one point ahead of Alvarez in attack is quite wrong imo. Hes a quick thinking relativly smart player, I'd give him at least 80 attack. I don't feel hes quit a 85 TS with 87 DS either, but not sure on values.
Top

mahesa maulana wrote:he's a good dribbler,i think his dribble acc could get 87.