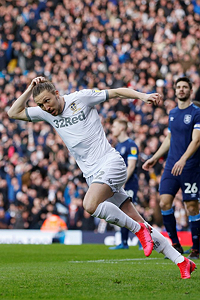 He's nothing special at all when it comes to dribble or touches. However, he gives me the impression of being more than a competent passer, and not a simplistic one.
Even under pressure he's capable of performing some long passes of decent difficulty and moderate speed.

I was expecting Koch to be a better passer in his début for Leeds, at least better than players than Ayling. I didn't see that difference then. But it was not a matter of Koch being erratic on his passes, but more of Ayling being an unexpectedly competent passer.
"Willy Wanda is Chinese!!!"
Top

He has his moments and some really good crosses, but he’s spectacularly erratic at them and especially under pressure will mess up things that make him look like 60 in time. If he’s bumped, should be small with that in mind
Top

Yep, short passing and aggression are values that can be updated immediately
Top

Forgot to mention, passing speeds would be the safest update. SPA is definitely less than LPA from last year for consistency. Stamina was something that could be higher as well. Even his passing speed can fluctuate though. He is a hard one to nail down at times. Fun player nonetheless.
Top

He had a great game. Everywhere.
Top

Had actually missed the first half so just finishing watching it. His passing was at times quite erratic even within this half, like at minutes 27, 37, 41 and 42 with the first two and last being really poor short attempts and the 41st really poor long attempt. Also, was a bit out of touch at times with the backline for positioning. Got lucky they flagged Salah as off one time he wasn't. He and Dallas are all action SBs who can and will go anywhere. He tends to be the one that hangs back though more so and forms a back 3 but can rampage forward at times. Today he had more chances to get forward, will not always be like that, especially then Alioski plays LB. Also, that cut pass to Bamford was really nice but a lot of poor balls too and his touch was hit/miss.
Top

As mentioned, can see the amount of time he is coming centrally here
Top
Post Reply
8 posts • Page 1 of 1