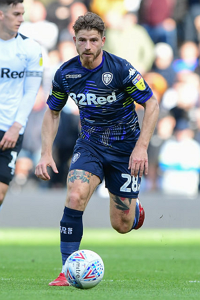 His DEF is overrated.Just good positioning but nth more for a SB.In that aspect and i think Costa is much much better as SB and as CB too who is at 72 i think.Dunno why he is starter and not De Silvestri..On the other hand he is deffo better in offence and little bit faster than his current stats.84-84 will be more suitable.His long passing is really crap almost in every match and against Parma one pass almost got outside the ground(i think first half).One good think is that he is a trully hard working running all the time for the team..
My proposals are ATT:71,DEF:69,TS-ACC:84,LPA:71,MEN:77,TW:77,STA:81
PANIONIOS RULES.GENOVA E SOLO BLUCERCHIATA - FORZA SAMP.
GLORY GLORY FOR UNITED!!!
Top

Lined up almost always as a CB, including in the first leg against Derby. Came up with a really nice recovery block after being caught ball watching a bit too much. He’s got good athleticism but is clearly not a natural CB and struggles to make the movements needed before danger arises to be in a good spot to deal with it. He plays like it’s his second position, which it appears to be. His attacking stats are in need of a good scrubbing it seems as his long passing is average and he tends to be only “good for a CB” going forward. I’ll try to watch more and these are just the initial thoughts
Top

https://i.imgur.com/1IojjX7.png first post picture, for some reason I can update pictures of every single player in England except this guy. Forum says I can't. Anyways, here is the picture and it is already updated on the main site! Could someone else try for me?
Top
Post Reply
4 posts • Page 1 of 1