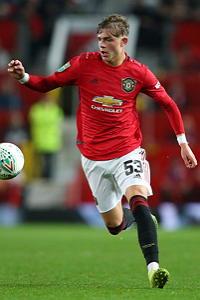 Quoted below is my post on him on the missing players' thread:

Injury Tolerance: A
Foot: R
Side: B

The latest player to break in Man Utd's 1st-team. I have based his Set around the one Laird currently has.
Williams is a right-footed Left-Back, but unlike most players who end up playing there, it seems to be his favourite-position at least in the last 2-3 years from when there is record.
Very attacking-minded, fast with great acceleation, and decent dribbling for a Full-Back, and in my opinion could even easily play as Winger, so if United hesitate to put a right-footer into Left-Back for the long-term, he might alternatively end up playing as Left-Winger.
He is a decent passer for a Full-Back and can play good combinations with other players, and his long-pass is great for a Full-Back, however his crossing needs some improvement as he currently likes more to dribble his way into the box or send low-crosses and cut-backs rather than deep crosses (the same like Laird).
His body is relatively good for his size and wins more battles than what I expected. He also loves a tackle, even some dangerous ones that will definitely put him in some trouble in the future. Overall he is decent defensively for his age, with his biggest asset being his tackling, but I think that he is better attackingly at the moment.
To sum up, I think that he showing great promise at the moment in order to break in the 1st-team, however I believe that Laird has a higher ceiling than Williams in terms of potential, if he stays away from injuries. Williams probably broke first into the 1st-team because he gets injured far less, and also he is one year older than Laird. Also it has to be said that mentally Williams seems better than Laird at the moment, making less unforced errors but better combinations with teammates showing greater understanding, but I also think that Laird is a more complete talent, especially physically.

His mentality should be greens IMO. He wears his heart on his sleeve and is a very mature player.
Top


Great performance and MOTM award as a starter away Vs Partizan.
https://twitter.com/TheManUtdWay/status ... 7969632259
This moment in the video from the game summarizes everything about him. Dedication in the tackle to win the ball back, as well as immediate attacking mindset as well as great acceleration and good passing co-operations with teammates.
Top 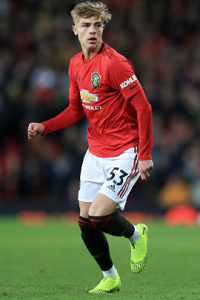 Good performance as starter at Left/Wing-Back Vs Chelsea. Offensively he didn't do much, but mainly defensively he has been very solid.
Top

He's been the pick of the academy graduates IMO. Even better than than Greenwood. Still maintain that he needs higher ment than this current value.
Top

godsplan wrote:He's been the pick of the academy graduates IMO. Even better than than Greenwood. Still maintain that he needs higher ment than this current value.

Yeah it should. He has been highly impressive whenever he played, with no nerves at all. Defensively he has been very solid, but attackingly we are yet to see how good he really is. We know how good he is attackingly, so the day when he is going to be able to show that at 1st-team level as well probably isn't very far at all from now.
Top

Time for an update given his excellent form?
Top

Yeah, he should. The biggest updates should be Stamina and Tenacity, but smaller upgrades should also take place for Defence, Passing stats, and Jumping as well.
Top
Post Reply
10 posts • Page 1 of 1