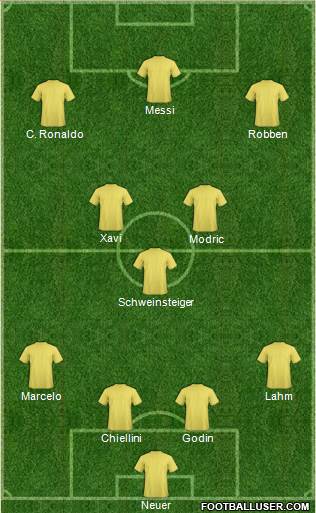 Weird, I started a new thread two or three days ago for this, it said it had to go to moderator approval and then this gets posted today.

Anyway some names I had which aren't above, David de Gea, Jordi Alba, Gerard Pique, Xabi Alonso (in place of Gabi) and David Silva.

I'm a Liverpool fan but I couldn't pick van Dijk or Salah despite their exploits over the last couple of seasons as it's over the decade not just two years.
Top

All stars threads have their own format, this is about posting teams with their formats and linking the players with their own classic threads, not threads with no format at all where you can post your own opinion of what players you like most out of the 2010s. We've got the Football Discussion sub-forum for that.

Salah and Van Dijk are the 2 best players of a team which reached the CL Final twice in a Row. I'm pretty sure that's better than what David Silva or Aguero reached at club level over the decade? Sure, Silva has reached international gold over and over again, but I think that team has already got alot of representatives in here. There are many names to include, but only 32 spots (23+9 like all the other threads), so I'm pretty sure there will be debates. I'm personally thinking of putting Lewa at the reserves for Kane if Tottenham wins the CL final. I don't rate De Gea over anyone of the current keepers, if anyone's got a chance to remove Courtois out of the current team, that's Saint Iker. Jordi Alba is a possibility, Pique although being a part of winning teams all of his career, never impressed me as much as Van Dijk. But if people want to I'm pretty open to make that change, I understand it. Gabi was the heart and soul of an underdog Atletico winning the league and reaching CL finals twice in an era of billionarism, constantly competing against the madness that the Barca-Real rivalry brought to football. Sure he never played for Spain and Xabi did but can't we just appreciate that idea?

Fair enough it's all down to personal choice who makes it and who doesn't, with van Dijk and Salah as much as it pains me we haven't won anything yet, Silva (as well as winning things with Spain) and Aguero have won multiple titles with City over the decade and where the chief architects in all them wins.

I understand my post weren't in the correct format, but seeing the idea hadn't been posted already and then it appears shortly after my post, I thought there would have at least been some nod to my original post, who knows when this would have been posted otherwise?
Top

Well sure it was a trigger, but this was a thread that was soon coming, we're only 7 months out of closing the 2010s, as you mentioned yourself, and with the CL ending soon and with there being no major International tournament in the summer except for Copa America (featuring Qatar xD ), there was no way this thread wasn't ready to be posted.

Am waiting for opinions and debates!

Pirlo in, Gabi out
Pique in, Van dijk out
Varane and Ramos in reserves, Barzagli in
Aguero in, Kane out
Kompany in, Bonucci out
Vidal in, Pogba out.
These are the suggestions.
Top

I think Mbappe shouldn’t be in there, I know he won a World Cup, but so did Griezmann for example and I see Griezmann over Mbappe if we count the whole decade! Other players I could see in there would be Ibrahimovic, Cavani, Filipe Luis or Thiago Silva
Top

I was comparing to the 2000s All Starts team which was posted in 2008 so earlier than my post.

Not sure what you mean by waiting for opinions and debates or is that just for others?

I'm struggling with the criteria really, Silva and Aguero have both got the honours compared to Hazard and others, if you're saying van Dijk, Gabi and Salah deserve their place.
Top

kuer86 wrote:I think Mbappe shouldn’t be in there, I know he won a World Cup, but so did Griezmann for example and I see Griezmann over Mbappe if we count the whole decade! Other players I could see in there would be Ibrahimovic, Cavani, Filipe Luis or Thiago Silva

Vidal has a better claim of being a decade long force than Pogba or maybe Gabi (don't know him too well or his longevity). Vidal's been great from the start of the decade and even now is still very good - big part of Chile's best years.

Maybe Hamsik was better in the last whole decade than Pirlo, Pirlo came good for 4 seasons at juve, in a system for him, after 2015 he was not very special in MLS and really unimportant in the second half of this decade. Think Hamsik has been at a really high level since the start of decade until last season and moved this year to China.

Ibrahimovic could take either Salah's spot or Mbappe's - both have been very good but much smaller timespans - Salah only really became a feared force at Liverpool? That's like last 1/3rd of this decade. Ibra only in 2017/18 was injured/not used in second season at Man Utd. but still 7 years of excellence at the top and continues to be really good in MLS unlike Pirlo who turned on "Retirement mode" and was meh.
Top

Ibra is defo going in, I don't even know how I forgot about one of my favorite players

Oh! F*ck! How in the world didn't I mention Zlatan?
Definitely the GoD in and either Mbappe or Lewa out.
Top

I'd say Mbappe, he's only been doing it the last couple of seasons and should be the main man next season while Lewandowski did it for Dortmund and now for Bayern for most of the decade.
Top

Oh! F*ck! I forgot Thiago Silva too.
Silva in, Bonucci out.
Top

Fabregas in, Kroos out.
Top

Can't agree with that, Kroos was a regular for Germany, Bayern Munich and Real Madrid when winning things, you can't say the same with Fabregas.
Top

Also forgot that Fabregas was the big Arsenal man before the 10s.
Top

Albo7 wrote:Ibra is defo going in, I don't even know how I forgot about one of my favorite players

i take personal offence to this

But yeah not 100% sure with Mbappe inclusion. Will be an amazing player but just recently burst onto the scene and we are taking the whole decade into consideration here. The 2020's will be his decade
And possibly being biased but De Gea > Courtois for me. There's a reason why he's constantly been in the PFA team of the season over him , despite his recent shit form
And Pirlo> Gabi for me from a purely ability point of view, but i do like your reasoning for his inclusion
Top

Agree on De Gea over Courtois

N'Golo Kanté has been a hugely influential part of his teams that have all won important honors, if we are going for individual impact more than a full decade's presence

I'm not that hot on Pogba tbh, he was a talking point throughout most of the decade but was he one of the defining players ?
Top

What about Jordi Alba? He won pretty much everything and is a Top player, and i would see Hummels over Bonucci, too
Top
Post Reply
37 posts

Return to “Other Era Teams”