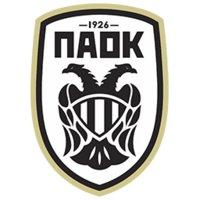 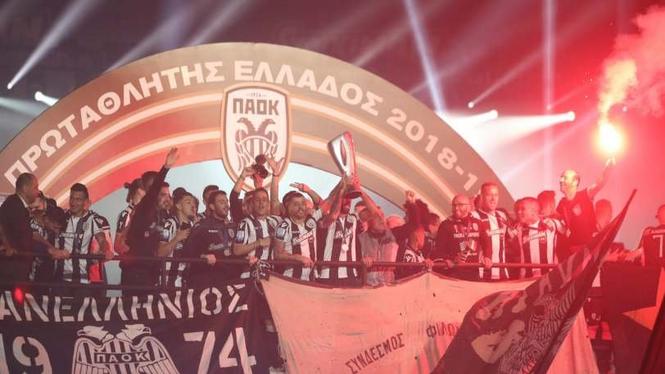 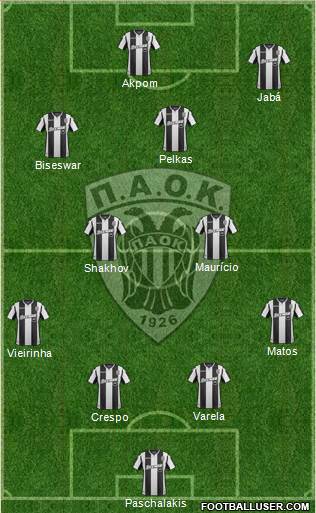 Champions after 34 years going 26-4-0, also won their 3rd consecutive Greek Cup. Coached by Lucescu and led by Vieirinha the team is the culmination of the Savvidis era and most likely the best PAOK team in the club's history .

A team with attitude built on a foundation of strong defense, safe and quick passing below the half line with an explosive counter attacking game. The team's possession game in attack shifted from an emphasis on feeding the striker from the wings to a fluid, frequently overlapping front-line in the second half of the season ( after Prijovic's departure ). This meant more freedom for the capable creative players, Vieirniha and Biseswar in particular, to shine and a more exciting and productive team. In the end both iterations proved just as effective, as PAOK never let up.


* Regarding the formation, both wings and Maurício's partner alternated frequently. Biseswar played on the left when Pelkas was on, El Kaddouri when Biseswar was AM and Jabá and Limnios shared the right wing playing very high. All of Shakhov, Wernbloom, Cañas and Oliveira started depending on tactics and frequent injuries but with a preference to play a CM instead of Cañas if the game allowed it. Wernbloom started while he was fit but he was injured and missed the rest of the season. I went by most minutes played for these positions. Having Biseswar on the wing, where he has freedom to move inside and drop deep, is more faithful to his overall presence in PAOK as well. Akpom took over as CF after Prijovic's transfer .
Last edited by Houy on 2019 May 21, 19:06, edited 2 times in total.
Top

Did Rodrigo Rey play at least something? He was one of the argentinian keepers I hade faith at the most back when he emerged at Godoy Cruz. He was even named to play in River but he was sold to Greece to soon. He's a keeper to keep an eye, but it seems sadly he doesn't play shit.
Top

Yes he didn't feature much at all, Rey is not too highly regarded here atm. I think he was good in his start last year, just lost favor after some errors and Paschalakis' arrival. He will likely leave since Živković was recently signed .
Top
Post Reply
4 posts • Page 1 of 1