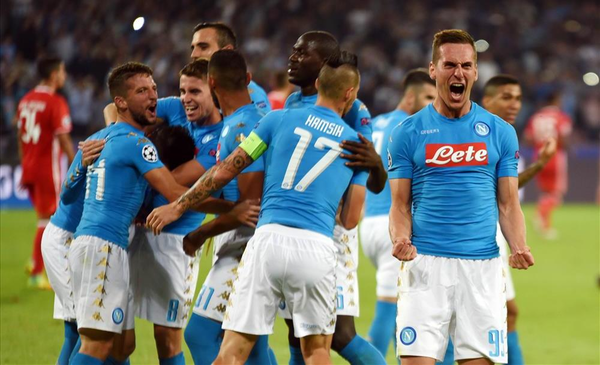 *Although an undisputed starter, Higuain left just after one season to join Juventus.

INFO:
Sarri inspired his team to play beautiful football (perhaps the best in Europe) during his 3 years stay at Napoli. Quick transitions and good link-up were in display each game, and each year the team grew stronger and stronger until they managed to reach 91 points in the league (2017-18), but even then they fell short of winning the title because Juventus bested them and reached 95 points the same season.

Napoli started the first season with Sarri really well, they finished second in 2015/16 with 82 points. The players struggled with Sarri’s tactical demands at first, but as the season went on things got progressively better and between match-day 17 and 24 they picked off 8 wins a row, which saw them jump to the top of table ahead of Juventus, but brief was the title challenge. In Europe, Napoli won all their EL group games and finished at the top, but couldn’t break past Marcelino’s Villarreal and exited at the round of 32. Gonzalo Higuain finished the season with 38 goals (35 of which he scored in the league) breaking Nordahl's 66 year old scoring record for a 20 teams season.

His departure in 2016/17 forced Sarri to to look elsewhere for goals, and so Dries Mertens (who was still considered a winger then) was tasked to fill the void left by the Argentine, needless to say he did so remarkably. He contributed 28 goals to Napoli’s 94 in the league (from 80 the previous year), but despite reaching 86 points they only finished third in league. In Europe, Napoli topped their group once again, this time in the CL. In the knock-out stage they met with Real Madrid, the title holders (and eventual winners). Sarri’s team demonstrated some exquisite football on both games, but the gulf in experience played in Real’s favour as they went on to win the tie 6-2 (on aggregate) in ruthless fashion.

By 2017/18 the team had reached its peak, not even Ghoulam’s injury could get in the way (or did it?). Mário Rui slotted in for the Algerian for most of the season. The team scored fewer goals (77) but picked up more points. They lead the league for most of the season, but ultimately lost it due to the lack of depth. Scenes from the Roma loss where players were visibly gassed out revealed the lack of rotation (a common issue with Sarri) had finally taken its toll, form was down and the title slipped out of reach. In Europe, Napoli had yet another disappointing campaign, they finished third in the CL death group (which featured Man City, Shakhtar and Dutch champions Feyenoord) and then lost to RB Leipzig in the EL round of 32.

All in all, Sarri’s Napoli reached great heights, but were trophy-less in all 3 seasons. They were sometimes unlucky, lacked concentration at other times but most importantly understaffed. More depth would’ve perhaps allowed them to win something, but alas we’ll never know.