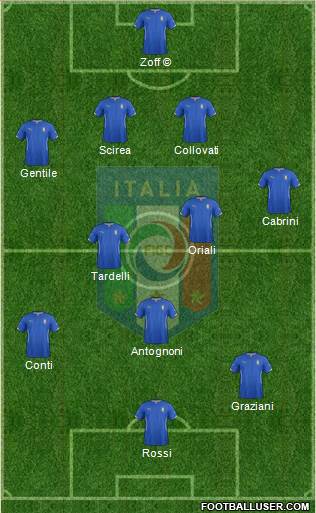 Your formation was the one Bearzot used in the final against Germany, when their playmaker Antognoni could not play due to injury.

Their actual formation used for the whole tournament was "Zona Mista" under this page:
http://en.wikipedia.org/wiki/Catenaccio

Here's what it should be:
Classy and skillful Gaetano Scirea was the libero, Antonio Cabrini the left back, Fulvio Collovati (Bergomi was used after Collovati suffered an injury against Brazil) and tough tackling Claudio Gentile the centre backs. As the system required, Gentile who was not normally a fullback extended his defensive cover wide to the right. Gabriele Oriali played defensive midfielder, Marco Tardelli centre midfielder and Giancarlo Antognoni the playmaker...To complete the roster, Paolo Rossi played the center forward position, Francesco Graziani played the second striker/left wing and Bruno Conti was on the right wing.
Top

who can make the last player?
Top