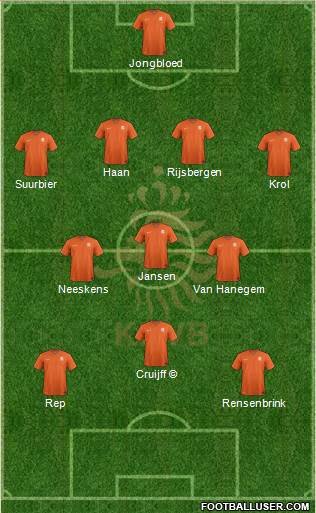 The best team of all time. But not the unluckiest.

The unluckiest is Hungary 54', when they lost to a much weaker Germany, while this Holland team lost to a great German side with Beckenbauer, Muller, Maier, etc.
Top

Later if no-one else does, I will create stats for the remainder of these players.
LIVERPOOL, CELTIC, AJAX AMSTERDAM, NEDERLANDS
Top

How did you do that?
LIVERPOOL, CELTIC, AJAX AMSTERDAM, NEDERLANDS
Top

I use the URL tags.
Top

its ok ive worked it out now

All player stats now made and links put up.

Could you post this team's usual line-up?
I have returned to the Classics section after a longer break. I am currently working on a list of Danish players from the 90s.
Top

Goalkee per should have been Van Beveren but Cruyff did not like him.

Sweeper - Barry Hulshoff was the man, but got injured before the tournament, Israel got injured too so it was down to Arie Haan. The sweeper moved forward in this system.

Centreback- for Ajax Blankenburg had this role, for the 74 side, Rijsbergen a converted right back had the role.

Side midfieders - Haan and Gerrie Muhren had this role for Ajax. Muhren was injured and did't go but was 1st choice so Van Hanegem and Jansen had these roles with Van Hanegem on the left as a slow but cultered playmaker.

Wingers - for Ajax Rep and Kiezer had this role. For this side it was Rep on the right and Rensenbrink on the left replacing the past his peak Keizer.

Foward - Cruyff, but he should have arrows going back diagonally in left and right.
Top

Well instead of posting in every players thread I will just ask here, zingo thanks for making the rest of the players I am grateful - so do not take this the wrong way or anything- I just curious as to why nearly every palyer (except for one I think) has Injury Tolerance A? I seen the Dutch from this time and they were not invincible, they often had players who picked limping injuries in some brutal games (ususally against South American opposition), and only continued to play due to the 2 subs avialble in those days. B is the standard for all players A exceptional.

The other thing that sort of off put me in general was the lowly Conditioning for some of the players, I should propbably post this for each player indiviually (will do it later), but some of them played an incredible amount of matches, I recently found Cruijffs matche totals for 74-76ish was over 50 games a season! Definately a canidate for 8 Conditioning, I know you did not make him he was just the most outstanding EX. Anyways I will try to remeber to post later in some of the players threads that I think could due with a raise.
Top

this team was called "the mecanic orange"
Top

Clockwork Orange.
I want my son Brooklyn to be christianized, but I still don't know in which religion - David Beckham
Top

Fixed links, Im going through all teams fixing links atm hopefully they will all be fixed by the end of the week.

Ive downloaded around around 8 or so Holland games from this period and will hopefully check over some of Zingo's stats which some people have been complaining about. I have an exam on the 25th so any suggestions/updates will be made anytime after that.
Top

mcmattie wrote:The picture isn't right! This is the team of 1978!

He's the furthest player in the left.
I want my son Brooklyn to be christianized, but I still don't know in which religion - David Beckham
Top

Huh now the picture is right! I swear I saw the 1978 team yesterday though.

The link to Treijtel's stats is wrong. It ends up with Raphael Schäfer.
Top

I made a set for Jan Jongbloed which represents him a lot better imo.
Top
Post Reply
22 posts