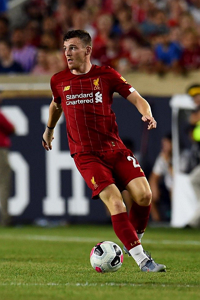 I think Robertson's Response and Explosive Power are a bit bigger in reality.
Robertson is extremely dangerous in attack taking a lot of strength.
A little more ball control.
Have you noticed the speed and intensity of Robertson's reaction to situations in the match?
(What is also a feature implemented in Klopp teams)
And all this has been a long time
Here's a little recent video of it. I do not use it as an argument because I do not think it was an incredible match against an incredible opponent either ( https://www.facebook.com/BrasilLFC/vide ... 050125469/ )
Suggestions:

I think he deserves the Index Card of Offensive Fullback, since he always attacks with great force and takes danger to the opponents.

How the feck does he not have close to an 80 for Attack?
Top

Shouldn't his attack be close 80ish? I mean he does have 11 assists as a fullback after all alongside TAA
And he goes way forward with how Klopp sets up Liverpool when attacking
Top

Agreed, also think his top speed and acceleration are much closer than this set implies. Somewhere around 85 for each if I had to guess.
Top

Would increase Attack but Stamina at 96 seems clearly too high.

Great player tho. Comparing to Arnold, his LPA needs to be higher.
Top

good update, though needs an yellow SP now, and a shooting a bit closer to 70, looked to shoot much more in 2019 and actually looked a threat, something similar to emerson, though a higher SP
Top

He had a fantastic header yesterday against Burnley. What a well taken goal.
Top

His TW is higher. He attacks a lot, runs a lot. *Covering I'm ok with, but his TW is more impressive because what he never fails to do is be in a position.

His DA should go green, and his TECH should jump two points.

Hasn't played in a three-men defense for an year, for club nor country. Wing-back position could be axed.
Top

Maybe he could have P04 - Darting Run? He likes to make those vertical runs. 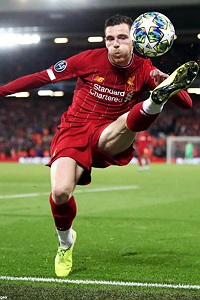 - we should consider this for the comedic value
Top Been thinking about him for some time.
captaincy should be added, he captains his national team with passion
and I see his tenacity going 87->90, his audacity is quite exceptional.
but i really do not see his crossing 90, the same as marcelo.. 88-89 will be perfect.
also i feel his balance can be raised to even 82, he uses it very often to win the ball back
and lastly, his header 66->70, he has produced some very good headers during his carreer.
what do you guys think?
Top
Post Reply
33 posts