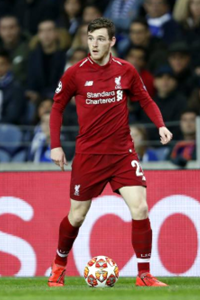 From what little I've seen of him, he look like one of those rare commodities in the game: a wide-man who can actually cross a ball well. His overall passing game has looked quite expansive to me. Better than your average wing-back anyway. Seems to be a very competent passer. Something to look out for perhaps.
"DEBT IS THE ROAD TO RUIN" David Gill August 2004

Double post, but having watched a bit more of him I'm confident that all his passing stats could see a significant raise along with curling. His crossing is what stands out the most. Can't really offer any concrete figures but he looks miles better than say Clichy and hasn't looked any worse that Cresswell or Bertrand. Might be premature to put him at yellow LPA, but he's certainly pushing that area I'd say. Certainly greens and probably a candidate for the early-cross card.
"DEBT IS THE ROAD TO RUIN" David Gill August 2004

This guy is due a few tweeks, he has had a good season in a poorly performing team. In particular his SPA and SPS should be closer to 75, he can make more difficult passes than the average full back. It seems that Hull aren't as good at making chances when he isn't on the pitch.
Top

I always liked him as a left back. Dunno why he was not signed by a Premier club when Hull was relegated two seasons ago, but it seems that his experience in The Championship made him an even better player in tactical terms. If he remains playing as good as he did against Leicester yesterday, he could get a massive upgrade in most of his stats.
"Willy Wanda is Chinese!!!"
Top

His TS/DS combo looks way better than this.
Today, for example, he managed to match the pace of Bellerín :O . He naturally struggled once Huddlestone was sent off.

But I still think both TS and (specially) DS are stats worth to keep an eye on him.
"Willy Wanda is Chinese!!!"
Top

This could be his very last season at Hull, even if The Tigers manage to remain in Premiership for the next one. With all the highs and lows of Hull, Robertson has been its most stable and reliable. Probably the strongest candidate for Hull's Player of the Season votes either by his teammates or club fans.

He certainly deserves to keep playing in top tier. For a stable mid-table side at least.
"Willy Wanda is Chinese!!!"
Top

Anyone noticed his crazy press in the late second half? He started with pressing on his usual positiom, kept going and going, pressed the keeper to eventually finish on the right side of the pitch? Insane stamina really, he's oranges
Relja's not dead
Top

Think he's shown enough to warrant an overhaul. Probably the best left back in the premier league this season. and so defensively solid, I can't really think of any wingers getting the better of him over 90 minutes.

I don't see his DEF as significantly worse than his ATT, he is pretty balanced in that regard and effective at both ends of the pitch, so I propose low to mid 70s for both.

Balance I'm not sure about exact value but he is definitely stronger than 74. Probably high 70's

70 response also appears too low but I would struggle to pin an exact value to it.

Crossing is one of the best aspects of his game, especially whipping quick low balls across the face of the goal so I would propose something like 82 LPA and 84 LPS. Curling could also get a boost.

Mentality needs a massive boost for sure, he's a tireless runner as emphasised by that ridiculous charge he went on against City.
Top

That’s even conservative for his crossing. It’s outstanding.
Top

well i've tried to follow robertson a bit. i really agree with what everyone has said about his stamina. there are some matches where robertson doesn't engage as much, but there are others where it feels like he is sprinting non stop. i got a strong feeling about his stamina for a while now, and even if he isn't always pressing like a lunatic, i generally don't get impressed like i am by the amount of energy robertson shows and can sustain through a match from any player other than kante- and i see robertson as favourable when he really gives it all.

other than that, well i'm not so impressed by robertson's defending when it comes to tackling. personally i see arnold as more skilled a tackler, but robertson is a bit more intimidating to go against because he's so quick to react and intercept passes, and converts that into a lung busting sprint all the way down the other end. when he defends against dribblers he gives quite alot of distance and is a little unprecise in his tackling, but he recovers really well with his acceleration and the way he doesn't bite too hard, so that he isn't really a wall, but does a very good job in keeping pressure on the dribbler.

touching on that acceleration again, it really stands out to me. i see keyzersoze pointed out his topspeed instead and so i respect that, but i have a different view. i see arnold as having the clear advantage to robertson as far as topspeed goes, but robertson can get up to speed much more rapidly, and so is usually moving at a higher average speed than arnold. robertson's acceleration has impressed me much more than topspeed, which i usually just see at around mid yellows- but acceleration has looked like 92 at times.

i also am impressed with robertson's nimbleness and general agility. it helps him alot to recover when he's defending, and he uses it when dribbling to spin out of trouble quickly.

one trait that really stands out to me about robertson is his responsiveness. as an extension of the huge amount of energy he is pouring out onto the pitch, he is constantly reacting to passes and trying to cut them out or intercept. as a result that stamina he has becomes really influential since he is so energetic in the amount of pressure he puts on the attackers of his side, and the way he can snap onto less than impervious passes constantly. eventually that tempo of play is really hard to keep up with and he just wears his opponents down.


regarding crossing, i think he's good, not as heavy a crosser as arnold, so i see arnold as having the higher potential ceiling, but he is more consistent and accurate than arnold at the moment certainly.

his da is pretty average, but with his acceleration, agility, and good DS, he can make useful runs forward. his touch is bad/ quite limited. his short passing is neat but very very limited.

i rate robertson's teamwork quite highly as well though. i think arnold is much more solid as far as tackling against dribblers goes, but robertson works much better with the backline, and combined with his explosiveness, and responsiveness, and his good teamwork, he's overall more solid.


i also rate robertson's mentality quite highly. i just see him as a relentless warrior, someone with real grit.

in this draft i have that i'll suggest as an update below, the topspeed is slightly higher than what i have in my saved draft, as well as defence, as a compromise out of consideration of some of the other comments above. response and stamina may be a bit much, but it's the gut reaction i had to robertson that i got pretty early on when i was getting to know him so i've stuck with it for now.

Set looks good vinnie, but I'm not sure I agree on a couple of points, namely Acceleration and Defence.

Maybe I've not been watching carefully enough, and I admit I don't really watch games with a PES head on anymore, but I just don't see Robertson as anything special in terms of Acceleration, not oranges anyway.

With regards to defence I think you've underrated him a bit, I see the argument around tackling but his positioning is normally spot on.
Top What a Player
Top

I support a lot of the changes in vinnie's set, stamina I would've thought was absolutely worthy of an orange value but the 95 is not so unreasonable. My impression of him so far is that he's more of a top speed > acceleration sort of player. I would also be inclined towards lowering both response and agility a number of points but other than that I agree with the changes and in my mind it's a good representation of him
Top

If there one huge weakness on him as a footballer, is how he struggles to time his movements when a deep cross comes from the opp flank and he has to mark/jump to cut that cross. Actually RM exploited this issue of Robertson a lot at some moments of this finals.
"Willy Wanda is Chinese!!!"
Top

https://youtu.be/DhMm09hZ_K8?list=PLXEM ... 3TWY&t=132
Just one of many examples of his quality crossing ability
Top

I wouldn't be opposed to having the set more closely resemble vinnie's view of Robertson, particularly with respect to the technical attributes. His crossing in particular is exceptional, and he's shown he can also add considerable curl and dip to his aerial deliveries. I also feel I can get on board with acc > ts more now in light of recent appearances. Not yet convinced of 87 agility but other than that I really like vinnie's set.
Top
Post Reply
27 posts