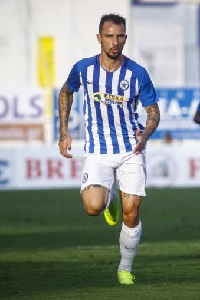 Started his Atromitos career in impressive fashion but essentially missed the rest of the season after his injury.

Close to the box he is an ace at eluding his marker with his trickery to gain a little space and take a shot. His finishing is strong and versatile and he uses either foot effectively, i believe he is the most dangerous shooter in the league atm. The team also missed his powerful crosses and set pieces after Giannoulis returned to Paok .

He is a bit of an odd player about the ground he covers. He doesn't approach the final third consistently, he often likes to stay low and move centrally to pick up a pass. He doesn't really try to follow through on combinations or attempt to orchestrate attacks though. He is not tactically inept but at times it seems like he's coasting