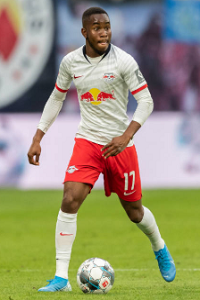 He played his first starter game last wednesday against Zenit. the first half he was disconnected with his team mates, you can tell he wasnt synchronized with the rest of the team. He improved a lot in the second half and participated in the two winning goals and showed more confidence and dare in his game.
Better to die quick, fighting on your feet, than to live forever, begging on your knees!
Top

In my mind he's been one of the most influential players in Fulham's recent resurgence, definitely one of their brighter attacking players. His attack should be around 77 or so minimum, he genuinely looks as though he could pose a threat against any team in the league.

Dribble accuracy could be at least around 84, he's tricky and explosive and he maintains tight control over the ball, often using dummies and shoulder feints to create space in 1-v-1 situations.

His spa and sps could both be around 78ish, although sps could be even higher, he seems to put a lot of zip into his grounded passes.

Tried making a comment earlier but then it got lost. Dang. Anyways, totally he has been a huge part of their turnaround in form. I think Anguissa is their best player, but Lookman is finally showing that he can put it all together. Also, this guy is really hard to stop when he faces up with his defender 1v1 and his low center of gravity is hard to knock off the ball. Really nice to see him come on from list last time in the league and show some development. We can forgive him for the penalty mess some weeks ago...

A lot of things looking really sharp with him and definitely should be in line for some bumps.
Top
Post Reply
5 posts • Page 1 of 1