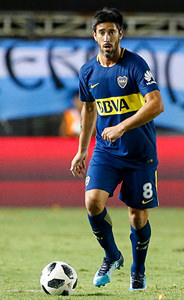 Am I the only one who can't understand the hype this guy generates? I mean, he's not a bad player, at all, but he became a showman type of player instead of the silent leader he used to be? He became really slow, unagile and I can't rate him as a great short passer like many people say...he's "meh" in this aspect, his sps is really low and he loses a lot the ball.

His long passing is classy, I really like the variety and his eye to send long crosses...but aside that, he's not a great defensive player and he's "Meh" in attack. I can't believe he's been called to NT and he's considered to play the WC, imo he's far from being NT material.

I'd decrease his agility, sps, aggression and raise his ment? and lpa
Top

Yeah , his sps, agi and dont forget his kp, he is doing shitty shots, mostly are easy, he takes a lot of time and needs a lot of space to hit some decent shots with power. Probably switching his spa and lpa isnt a bad idea to in the short aspect he becomes pretty passive and safe passer.
Top

Given him an update.

This was a really beautiful very long pass...ended up in goal right?

Also scored with a nice shot in here the second goal

10 matches is enough for me to heavily decrease all his speed and response stats, he's like the slowest player in the pitch like...ever, any game. Today he scored his first goal in the club to win the match, but he was really inaccurate at his passing and in general, obviously he got a yellow card as well.
Top
Post Reply
86 posts