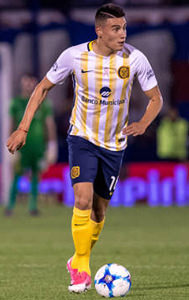 he is playing well in the middle, yeah could have matches without do great things, but he is intelligent to play as dmf - much better than as cb - little amount of movements but he knows where must put in the pitch. Also is reaching the box with a decent regularity and shooting from outside the box with nice sa. Hard to rate tbh, but seems def>resp by a couple of points and his sta seems much better.
Top

now he is covering much more mts of the pitch, really nice movements off the ball to being an option in attack and defense, showed good tank of stamina moving around the midfield. Looks like a competent passer making nices crosses . Again he is showing nice shots from long rangs - looks capable of shots with great kp, kinda 83 ish - and for sure needs better sa.
Top

Indeed he's quite a decent player...every time I watched him looked quite good in the midfield...probably some numbers are harsh
Top

Yeah, he improved A LOT playing as dmf, when he played as cb had a really conservative style in b nacional and his first matches in first division werent so good how i remember, but since the last season he is playing pretty good, doing a decent holding midfielder with m. sanchez the last year and now with acevedo. I have some numbers to update him, but have my doubts how looks in game, especially in his combo in sa/st/kp and his speed stats, doesnt look soo fast - in fact, he isnt - but at least can reach ts green in my eyes. Also he is the pk tacker sometimes from the right side, a does decently good, so he needs a raise there. About his passes, at least his short ones are decent and his long passing are good but isnt better than the short ones.

Damn he looks so good, he's like our Yaya Touré strong, tall and gifted midfielder...slow but effective at passing and always reaching the opponents box. His tw is just fantastic, could use a raise in there too...probably his shoting abilities are better but I'm not sure, go ahead Pablo.
Top

well, i made changes here after of the great match vs Colon, he did a crazy match in my eyes, recovering a great amount of balls and being annoying to alan ruiz and figueroa. Probably, needs higher values in da and passes. Agree with victor, he is tall and really gifted player, something strange to find here in afa.
Top

he played a fantastic match today vs Colon, was an absolute machine to covering his mates and build up some moves from the midfield being kinda the driver of the team. Seems I was harsh with his passes, he becomes great and great in every match. Btw cant say if he is better in def or in att, he is damn smart in both senses. He deserves a place in the jjoo, he is so complete and looks he can grow up in a lot of skills.
Top

Move him to Rosario Central
Top

Definitely he cant play as dmf alone, he needs a hunter player near of him. His level until now in central is just meh, he doesnt fit in the intensive style of coudet's team, he is slow and is not a quick player to play at counter attacks. The other day vs estudiantes was the perfect example of that, he couldnt with the tactic of them, couldn't recover a single ball in his position and was so shitty about coverings and being an option to the defenders.
Top

he is pretty good to the tactic of central, i mean he is good about being the distributor of the ball in midfield making a good amount of passes with great variety, far better than musto but lacks of intensity/speed and the team suffers a lot. btw added some cards and stars.
Top

Another player that his level is really bad, missing easy passes and failing by his poor commitment, inst the half of what he was in Union, with Romero and Gil at his sides his bad level isnt notorious but when he plays alone you can see taking bad decisions. Seems he must play more in a free role, putting as a static cmf/dmf cant show what is capable of do.
Top

Paablito wrote:he is pretty good to the tactic of central, i mean he is good about being the distributor of the ball in midfield making a good amount of passes with great variety, far better than musto but lacks of intensity/speed and the team suffers a lot. btw added some cards and stars.

Playing as cb he doesnt show those limitaitons, surrounded with intensive players like j. l. fernández as lsb and tobio in the right with gil in front of them, is more solid, doesnt must cover a lot of mts - who clearly isnt good in that aspect - so thats help him to be more "fresh" when has the ball.
He is a great addition playing as cb because he is a great ball distributor, makes more easy the job to the midfielders so gil or m. gonzález dont must go down a lot to receive the ball, he carries with criteria and could break some lines with grounded passes or playing long balls to zampedri, ruben or herrera.
Top move him to Racing Club
Top

Paablito wrote:He is a great addition playing as cb because he is a great ball distributor, makes more easy the job to the midfielders [...] dont must go down a lot to receive the ball, he carries with criteria and could break some lines with grounded passes or playing long balls

This this and this lol

His level with Beccacece is great great playing mostly as cb in a 4141 formation but when Racing has the ball the sidebacks goes forward and chelo Diaz put between him and Soto/Sigali so Racing changes to a 3 4 3 with Sigali/Martinez - Diaz - Martinez/Soto ; Pillud Miranda Rojas Mena ; Montoya Lopez Zaracho.
His ball contribution is pretty nice to see, good overall movements and also is intelligent at coverings, he is recovering his best level by far.
Top
Post Reply
15 posts • Page 1 of 1