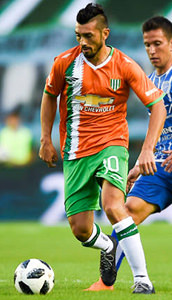 Thanks so much fds!!

Here are my notes from his 1sr serie A match. As I mentioned before, he played more of a CMF/AMF role with *Side tendencies rather than a SMF(as Napoli doesn't have that position in their formation). It will be interesting to see if he can co-exist with Hamsik.

I thought he had nicely place LP & good DA. I thought he was a little slow and methodical on the ball, but precise. Good tech, & seemed to be their set-piece taker in all situations. Good Bal for his size(current rating of 79 is fine), not great Res.

Looking at his current stats here are things I want to keep an eye on:

Attack: 78(I'd like to see more, but this is a pretty high value)
Top Speed: 80(not sold he is even this fast)
Acceleration: 82
Short Pass Accuracy: 73(want to keep an eye on his passing in general. obviously his LP is more lethal than his SP, but does he deserve higher values or the *passing?)
Short Pass Speed: 74
Long Pass Acc.: 81
Long Pass Speed: 79
Shot Accuracy: 76(I'd like to keep an eye on his shooting as well...these are pretty high values for a MF)
Shot Power: 78
Shot Technique: 82

Overall I have no complaints with the current stats from what I have seen, and I look forward to getting more familiar with him. He didn't have the best debut, as most of his passes didn't connect with targets...but showed lots of quality in his play.
"The Recoba Effect"
Top

Watched him against Juventus, in general had silky touches and an excellent dribbling ability. Also, he seems to be completely based on attacking.

Oh, he came from both the left and right side and cut inside too a lot.
Buon compleanno, il pibe d'oro.
Top

I saw him playing on the left some that game too. Another interesting thing I heard from a SA analyst, is that "Boca is really missing him this year. They lack somone with his pace to compliment Riquelme. Someone who moves around and works." Not that 80ts/82accl is slow, but is he possibly faster? Haven't seen him enough to spit out a value.(I like how my previous post I wrote I wasn't sold he was even this fast

i think he is actually better than his stats

It says on the Napoli formation page that he can fit in at LWB. Should he have this as one of his positions then?
Top

That is probably only because they don't have SMF in their formation. But when I have seen him play for Napoli....he was playing in Hamsik's spot which is technically an AMF

he was a replace for riquelme a couple of times being an AMF long time ago, playing at boca. he has fine skills for an average AMF

I really like the way these stats are made. Only changes I might eventually make would be minor. With the possible exception of Agg. I added WB(optional), as he played a WB/SMF role in the Coppa match, and it looks like that might be his spot to get playing time...but we will see.
"The Recoba Effect"
Top

thoughts?
Gotta change my shirt, it's sticking to me. I'm sweatin' like a cunt. Don Logan
Top

Any final thoughts of Serie A/Argentininean followers of this guy?
Top

isnt his LP a little overestimated? today against udinese i've seen some bad crosses and a lack of teamwork,TW value could be fine
Saving Private Adrian

zuo wrote:isnt his LP a little overestimated? today against udinese i've seen some bad crosses and a lack of teamwork,TW value could be fine

he takes virtually all of Napoli fks and corner kicks, ahead of Gargano, Lavezzi and Cigarini. accuracy isn't pinpoint, but then again he doesn't have much to aim for.
Gotta change my shirt, it's sticking to me. I'm sweatin' like a cunt. Don Logan
Top

To me...one of these names doesn't fit at 83 mentality for a SMF:

In my head, the other 4 are clearly more hard working. I would have thought a 80/81 would have been more appropriate...but I could be wrong.
"The Recoba Effect"
Top

In my head, the other 4 are clearly more hard working. I would have thought a 80/81 would have been more appropriate...but I could be wrong.

mentality @ 80-81 sounds right for Datolo
Gotta change my shirt, it's sticking to me. I'm sweatin' like a cunt. Don Logan
Top

Here is a quote by the commentator in the Roma match:

Turned into a complete player by Donadoni, tracking back and working hard in defense. When he came he used as a more attacking player.