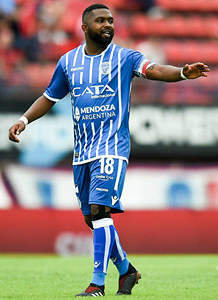 Nice player, how is he doing now? I like him

moved to atlético
http://www.furacao.com/materia.php?cod=36546
In heaven or hell
Where is
Your shield is my honor, my love
Born, live
More than twist
Atleticano to death.
Top

In that web site says that they start negotiations, he signed for Atletico?
Farts stinks like a mother fucker!
Top

Nice! The age is wrong I think
Top

finally. now you can move it, his contract is already signed.

Moved. He look interest with you ask me, don't understand why he did so few matches with Atlético PR.
Top

Damn poor player, that's not all that speak not! At least he did not shit on Atletico PR.

The National sold a bad player for the price of a star! Thankfully, Atletico won the case and will receive the money again.

He isnt a bad player by any means.. <-- Prior to be sold to brazil, he was (yes, was, till he gave positive for cocaine on october of last year )an idol on nacional, 15 goals 15 games on Apertura and 13 goals more on Clausura? I would like to see a bad player doing that. Anyway, it's unlikely to see him staying at Nacional.. he himself said it was almost impossible, and that he is much closer to join a club in Turkey.. I am not sure he moved back to nacional? was he on loan or smth?

It's on spanish, but that's where he says^

He made a good game only, in which he scored two goals, the rest of the games it just dragged on the ground, it must be because he snorted a lot of cocaine!

But look, here is the official news site of Atletico-PR! Says he was returned to the National!