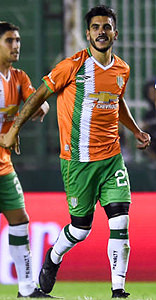 Go ahead with form 4 if you want.

Amazing game of him yesterday (Qulmes), he's fucking irregular really.. he recovered a lot of balls and did some great coverings, maybe is not too much visible but he covers a lot of meters and is always running (his stamina is great). With the ball was irregular (59/81 -83%), failed some passes, some easy short passes (as usually), has a problem there, he can give good passes, and some good pass between the lines, but also fails passes of 2 meters..

Better combination in passes with Mas (15):

Defensa y Justicia: another good match of him, is a very good Mercier's substitute.. does the dirty and silent work, really I never saw him tired, his physical condition is amazing, at Pichi's level. Similar to his match against Quilmes in terms of marking but with more participation in attack, he's free to go. Also used enough the step on.

He has that quality of appear in the area every match, like a free roaming, but doesn't deserves that because doesn't score usually.
Top

Is in an impressive level, man of the match against Arsenal. Is bringing a lot in attack and generating too much danger, adding to each attack (with that capacity of soltarse that I mentioned before, -these matches seemed 3 att aw-) being an option always and giving great passes in the last line, he leaved Matos 1-1 vs. Limia 2 times, the first one with a nice dribble and a good pass and the second with a killer outside pass, also is doing very nice dribbles.. great problem to Bauza now, he can't be out of the 11 in this level but Mercier and Ortigoza neither.

Yeah I watched him and had a good match, seems he improved his passing and decision making. Still that heat map isn't too much impressive to a dmf/cmf.
Top

Yes, probably isn't impressive because he's more focused in attack, since a long time that he's better than in def, with great participation/determination there , he's 3 att aw, for sure higher agg and is showing and insane jump in stopped balls.. also doesn't need enforcer card more. + some little tweaks in other areas.
Top

My notes about him:

his acc must be low greens
his agility seems whites to me
his response not impress me to be yellows.
his pace its pretty poor in short passes...
Top

Was great against Lanús and Boca again, in that free position, creating a lot of danger and very good at passing (probably this is the first moment that deserves yellow spa), is hard to the rivals find him because is playing with a rare role.. looks like a free roaming and like an amf a lot of times.
Top

i find him as a b2b player, not a free roaming, also his tw/ment doesn't seems to good lately - despite he did a really good match vs boca - also is true that he doesnt need that value in ep and is quite debatable his att/def ratio, as well as his speed - seems yellow in some occasions but he's really inconsistent and pretty lazy and he doesnt show at all - and from what i see him i find as sps>spa.
Top

He's like a b2b player, but after some time is like a free roaming with a lot of appearances in attack/box and making diagionals, can't be both? I believe that this moment is showing the top of his ment/tw, when the team isn't in the best moment he's appearing, fighting and is always an option, with a lot of participation and a role, is one of his best moments since's here. About spa/sps, he's giving yellow short passes, but I don't think that he can reach yellow speed.. and I'm not agree that he's lazy, give me time and I'll post some videos to see him close.

This set was very good rated by Jorge, but he improved a bit in some areas (att/passing/tech), decreased his form and is not more an enforcer. Also his ep/acc can be worse as chamak said, but he's very rare in terms of speed, in the first view looks slow but rarely loses running.
Top

He keeps with that role playing as dmf/cmf when the team doesn't have the ball -between Mercier and Ortigoza- and being free when the team has the ball, reaching the box all the time and with offensive "weight", how can you do that in game without fr? Imo he's hard to rate.

That's a constant in his life, this tournament is in a great level but in the middle had a ghost match (Newell's) where didn't do anything
Top

Another good game, this is the more regular tournament for him probably, good dribbling and deployment in attack again, he's got less defensive work every game with this new role and seems 3-2 aw, and probably now is att>def, despite he's good at tackling and decent at marking, also could have smf position, played enough matches there Are you sure he plays smf? Probably he's more cmf in the side.
Top

Now is a cmf playing like a nª 10, but he played as smf in the last tournament and in the cup, Bauza defensive tactics jaja
Top

to me always be a cmf playing in front of a deeper midfield, but he can gives some support to the defensive line and also make good runs from the opposite box, im agree with 3/2 awareness, and also seems att>def since a while, white ep, mid green acc, low yellow ts, probably needs little better sps and little less spa.
Top

I agree in all, but I think his ep can be low green, he can do some decent turns to make a dribble, is enough better than Mercier/Orti, and he improved significantly his da/bc, is doing very nice dribbles/movements with the ball and chest controls (really good ones)

Scaramuso wrote:I agree in all, but I think his ep can be low green, he can do some decent turns to make a dribble, is enough better than Mercier/Orti, and he improved significantly his da/bc, is doing very nice dribbles/movements with the ball and chest controls (really good ones)

He is agi white, he has better that Mercier because the agi of Mercier is 60's for me, i agree with the rest.
Señores yo soy del Gallinero
Top

Here a lot of material to make an update.

He needs a new set since a while, if you are interested in update him, I can suggest one.
Top

My set, based in past notes and videos.

It seems he doesn't feel confortable in the middle, no more.. but he can't play other side with so many players.

Some opinion about the set?
Top

well, isnt a bad set tbh, just i would remark these things: white ep, less resp (78ish) mid green acc, low yellow ts. and form 4 as top (i know he improved his developments but always was quite intermittent despite of he can play a good tournament, is not a player who calls your attention by his performances in each match.
also i feel pretty good with his actual values in da/bc/tw/jump (even this could be worse) and dont see the reason to give him 68 in def-
btw isnt at 72kg?