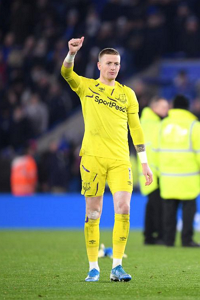 Haven't seen much of him, but he still looks much more agile than most keepers in English football. He's relatively weak for his position, but when he turns for a jump he seems to show a fairly good agility.

Can't say much regarding the rest of set, but if I notice something else, I'll let you know.
"Willy Wanda is Chinese!!!"
Top

My bad that was a typo, though on that note I think 90% of keepers are still outdated with inflated values for EP
Top given a slight upgrade, the pes17 keeper stats need more work, I don't really get rating them
Top

Need to have a look at his and indeed the other 3 candidates (or rather two and actually post a set for the other) stats for England no1, all probably need some work
Top

Isn't his overall footwork a bit better than this?

Let me be clear regarding that point. He's sure above most English keepers when it comes to use his feet for ball distribution or just striking the ball pretty hard. Nevertheless, there are better keepers than Pickford when counting outfield skills overall. Like Éderson or Dúbravka (whose set is still missing; he was such a valuable GK addition for Newcastle since February or so).

Pickford's kicking power looks more like bordering orange values, if you ask me. He reminds me a lot of Ben Foster in that point, when his powerful goal kicks had a very important role while he was a loanee at Watford like 12 years ago. Imo, that's why Ronald Koeman made so much efforts on demanding Everton staff to do what it takes to get Pickford. He was a bit underwhelming before Koeman was sacked, with Ashley Williams being the lone decent performer among an unstable, fragile D-Line. Then "Allarvice" took Koeman's post, who started to demand a more no-nonsense style of defending. In a way, this forced rivals to try shots more often from mid-long range. And Pickford started to shine a bit since mid-December, being now a solid shot-stopper as well behaving as a sweeper-keeper if required and gaining importance at starting counter attacks from his own box.
"Willy Wanda is Chinese!!!"
Top

Yep, didn’t look at that when I did the review of the English keepers, but yep should be the standout with his feet and in SP, though how he should compare to schmeichel, and whether foster is still worthy of quite such a high value.
Top 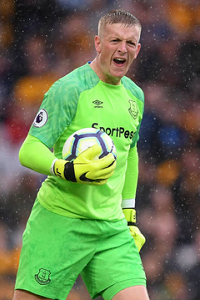 His SP is definitely oranges imo, can hit them long and hard
Top

I think his goal kick today went straight out of play for a goal kick for Newcastle, it slowly rolled the final meters, but still he does seem to have a very big reach on them.

In first half did not look comfortable with high crosses, not just the pen.
Top

Oriello wrote:https://www.transfermarkt.co.uk/jordan-pickford/elfmeterstatistik/spieler/130164 since June 2017 saved 7 out of 15 pens, including today.

I think his goal kick today went straight out of play for a goal kick for Newcastle, it slowly rolled the final meters, but still he does seem to have a very big reach on them.

In first half did not look comfortable with high crosses, not just the pen.

I notice him constantly struggling in the air. His dealings with crosses leave a lot to be desired and he fails to project an aura of confidence to reassure his teammates that he can take care of anything coming in. Occasionally he just makes bone headed decisions and can cost the team points (first game vs Liverpool with the last second Origi goal) but if reliant on his reflexes will tend to hold his own. Still seems quite raw to me, which is true considering the longevity of keeper’s careers. Last few comments are absolutely correct, he has a cannon of a leg.
Top

Guy seems uncomfortable with almost every aerial ball, maybe it's because of his short arms but it's something that stands out whenever I watch him
Top

The power on his kick/long pass is crazy. In the Arsenal game he kicking for fun.
Top

Unfortunately his ball distribution has looked below par if compared to his previous 3 seasons.
The overall set looks spot on stats wise, but I would be careful with both SPA and LPA. If he keeps being that erratic passing-wise in the mid or long term, then we should consider lowering those two stats.

He's felt the post WC "hangover" effect, unfortunately for most of the 2018-19 season.
"Willy Wanda is Chinese!!!"
Top

Defense prowess to 56 and then I think he’s drop kick style 2, otherwise the set is great
Top
Post Reply
18 posts • Page 1 of 1