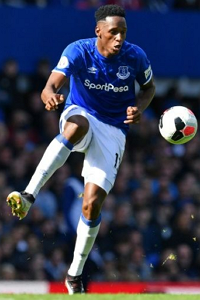 pelimetal wrote:#26 - Yerry Mina from SE Palmeiras - Colombian NT player, who plays as LCB. Left footed, great Header and BB combo (1,93 cms-80 kgs), nice RESP. Sadly a low MENT as his IT. He can use his right foot in a decent way several times per match.

Honestly, regarding the skills for the recent PES I would choose a different balance.
Considering that the new skills follow a different scale from the old ones, having a slightly higher tendency and evidencing the differences of style, I would opt for adjustments here and there.

I would rate him on ball winning with 85. That's right, 85. He reminds me quite a lot of Boateng's style, with greater focus on his physical strength and anticipation ability.
While in the defensive prowess pure, I would say something like 81 (maybe 80).
It's not that he is not good in this area, he acts decently. But I just see that for how the two new skills are defined and analyzed by the rest of the forum and by Konami, I think there's been a bit of synchronicity. And this comes from the first set of it that I gave BW lower than DP. But it really is a case for Ball Winning greater than Defense Prowess.
Well, I did not elaborate much on the defensive feat, but that's it.
I think his general ability, for the things I've seen to this day, is more of a good defender's style in stolen ball, but not so incredible in the general defensive capabilities of playing, coordinating, making decisions ...
Again, do not say he's bad at Defense Prowess. Only that his Ball Winning should be better consering the new balances around PSD and Konami stats.
Top

Ball winning at 85 is very high simply because 80% that makes his tackle is by force and not by technique. That doesn't mean that Ball Winning should not receive a raise (I follow the Epsi account if I am not mistaken, where Ball winning is 70% def and 30% bb).

About def prow, which I also think of as a mixture of defense, response and teamwork, ends up having to be smaller than Ball Winning, possibly (since he has strength in 91).
So it is necessary to reinforce its main abilities are: the reaction, closing the spaces, and the decent positioning. In addition, reinforcing his "defects" would be a technically weak tackle (where the force is far superior to the technique) and the weakness in the explosion of his races (as it is already on set).

Within all alternatives, I think that by lowering defense by 80, increasing response by 84 and team work 78/79 ... we would be able to keep the set realistic and also realistically leave a ball winning at 83 (more power than technique, a 81def could overpower) and def prow at 81/82.


Edit: Anyway, nothing so different from what the set suggests but yes, he needs to have a better balance. We only have to putting in this set his great reactive capacity and mainly his surround style, block the spaces of the opponent. Also making clear his technical "deficiency" in tackles, camufled by his force.

Anyway, having watched all his games this year I think the set is very real, beeing sincere. I will test the values ​​cited, even def in 79 combined with a higher teamwork maybe (I really don't know) and will be the first step to the defenders' revolution (not just them) in the Brazilian league.
Top

What a hell of a player. I always tried not to let it overrated but I ended up being strict on some attributes. This guy has everything a modern defender needs: good playmaking skills, an insane airplay, aggressive (offensive and defensive), incredible power and a lot of speed, but a lot of speed.

Probably he will go to FC Barcelona, ​​IMO he will fit very well in the team since he has characteristics and offensive versatility but unlike most of the team's defenders these last times, he is a "real" centralback.
Top There is an error in the web site of the player in the part of Selections they appear all their stats in zero
Look:

Cskarlata wrote:There is an error in the web site of the player in the part of Selections they appear all their stats in zero
Look:

It's already fixed.
There was another registered Yerri Mina (with empty set), I replaced it with this one that is the true one.
The other set was just a complement.
Top Why is his injury tolerance C?????
Top

his gonna move to barca 2018
pre contract has been drawndown.
Top

At NT he scored 5 goals in 14 international matches, that's quite crazy tbh.
Top

He has been monstrous in the air so far.
Top

You can add another one. He's absolutely dangerous in the box, great leap btw.

Few things I want to highlight about Mina since he’s been in the EPL: his leap and aerial game are amazing, he’s calm and confident on the ball, and he’s not quite as good a defender. Very big and strong for sure, Mina pairs with an excellent leap that’s at least in the mid-yellow territory but almost certainly higher and proves to be such an aerial threat that teams always have to account for. Defensively he’s not got the best partnership with Holgate when both are roles put together. He’s been a bit more reserved in the EPL and not quite as aggressive and proactive at least recently, but still capable. Mina definitely can have coordination issues, but I think he’s growing some more than his early displays at the club with some clangers. For a defense value, though, I would still have him a little under league average for his total ability and then that being compensated with awesome physical traits and good on the ball skill. For defense, 78 seems a better value for me and potentially a little lower response and maybe 1 more point off TW. Mentality I have not seen this level, was he showing it in the past? However, he definitely needs at least mid yellow jump as highlighted above. The rest of the set looks pretty good from what I can think at the moment. Shooting I’m not going to comment on, I saw a very close half volley from him but have not seen enough to suggest anything different and know he’s got a very good goal scoring past, so will leave that for others to say something if they wish!
Top

His Headers are surely orange, easily 91 to me. He's brilliant at them. He's the kind of player that when you see a good cross being directed at, you can bet beforehand that it'll be a goal. Everything about his aerial game is just ridiculously good.
See this,
https://youtu.be/jwolaBPtmrw at 0:52, see how good his awareness is; he knows if he just slightly redirects it, it's a goal. Now, this can be replicated by the current 86 as well but it's just that he's so consistent at them that he will almost never fail at them.
See this, https://youtu.be/oZvRjqDKtOU, same technique, much more power. You can see this one cannot be replicated ig by 86, it takes something like 91 to score like that consistently.

You can also see in the goal that his Jump is much better than 78. In the goal, it may seem something like 83 but I've seen some of his Defensive headers and I got the impression that his ceiling can be much higher than 83, something like 88, although it wouldn't be right to give him such a value as he almost never uses it due to his humungous size and strength.

As for his BB, 88 seems alright though I wouldn't oppose a point or two more.
He's on course to become the best 'scoring-defender' among his peers like Vidic and Ramos and I think he will be a good asset to all the teams he will play for in the future.
So, my suggestions for now are:
Headers------>91
Jump------->83
Top

His heading is absolutely monstrous! I agree he’s going to be in that special category of scoring CBs. However, his accuracy over my viewing period was not quite consistent enough for oranges in my mind at least and just below. I know he’s got an amazing past of them, but there were enough times where he was missing the target from angles he really should be hitting it from or just not getting the connections he should. His jump is consistently amazing and I have no problems whatsoever with it going higher into the yellows. I have seen some ceiling stuff around 90 in my viewings and 86/87 are quite consistently shown enough to warrant that. For header, I’ll give you a little upgrade as well since it should be above his jump.

Actually went back and rewatched just to triple check myself since I wrote that number pretty comfortably earlier and he doesn’t have to always use the huge jump since he’s really big, but it’s really noticeable when judging crosses where he’s the closest CB that he’s really consistently showing a fantastic jump. He’s definitely 86 at the minimum and 87 would be the number I personally recommend. Whenever he can use it, he does super consistently and has an even higher ceiling. Again, definitely best to see this stuff when he’s defending crosses and the closest CB to the ball. I just finished a huge binge of Everton and saw a really big sample size of this in particular. Wouldn’t count it against him that it’s not shown when it’s not needed. Like, the alternative is over jumping the ball which is just pointless, or when he’s dueling with a CF on a long ball and more using his strength to get it (although he jumps over big guys quite a lot if they’re also really strong!). Also, defense adjustment and other notes in a previous post still stand.
Top
Post Reply
16 posts • Page 1 of 1