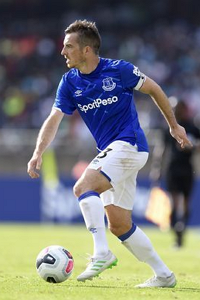 What do people think about a small rise in response and a more sizeable increase in short passing?

Something a long the lines of:

IMO He's actually quite good at responding to opposition play and spotting potential threats for his age/experience, as well as getting himself in the right position. Also, he already has solid long pass stats which reflect his abilities in crossing but he does not always cross into the area in the air (long pass stats) but also along the ground (short pass stats) with quick short passes from the side. He did this very effectively in the recent derby game with liverpool for example, providing Anichebe and others with a few decent chances with accurate and speedy ground passes into the area.
Top

On reflection, i believe his shot power should be lowered to around 86. If you take a look at the ladder you will see what i mean:


Infact while we're here, i would put the following players on these values:

If you look at his crosses they have tremendous bend on them, so i feel you could up his curling to about 84.
One Evertonian Is Worth Twenty Liverpudlians
Top

I'll second all the stats increases proposed, and the shot power reduction looks reasonable, too.

I think he's a touch underrated here but in fairness he's not really broken through yet. Overall I think he has the talent to establish himself as England's second-choice left-back - and maybe even challenge Ashley Cole.
Top

A decent English prospect. He has decent pace, is quite powerful and has the energy to run up and down the wing throughout a whole match. He is also quite a good crosser of the ball and a good free kick taker. He hasn't showed his best form for Everton, but I predict in time he can show the form which earnt him so much recognition with the England Under-21's and Wigan.
Top

He has showed his best form for Everton - hence the England call up!
One Evertonian Is Worth Twenty Liverpudlians
Top

I suggest increasing his FKA by a few, he's shown to be very good at getting them on target which has led to a couple of goals, not only at Everton but in his days at Wigan.

I feel that his current value doesn't do him justice.
Top

GavidTreveguet wrote:I suggest increasing his FKA by a few, he's shown to be very good at getting them on target which has led to a couple of goals, not only at Everton but in his days at Wigan.

I feel that his current value doesn't do him justice.

I agree Gavid. I would suggest about 82.
One Evertonian Is Worth Twenty Liverpudlians
Top

Yes, 86 SP would sit better on the ladder, a higher value (84) in curling sits well with me also, his ability to whip the ball in is very good, though his accuracy this season has been a bit dissapointing, alot of the time the crosses were too low and close to the near post, would not lower his LPA yet though, perhaps he'll work on it during pre-season.

His FKA should probably be raised but i'm not sure he's as adept as Aurelio but then again, Aurelio's curling value is far higher which would perhaps make the difference. What do people think about his TW? Has he shown in enough to warrant an increase? His understanding with Pienaar has produced some of Everton's best moves this season on the left wing, I feel he deserves an increase, somewhere in the low 80's.
Top

Has anyone got any thoughts on Leighton? From what I've seen he's had a very good season, he just strikes me as a solid performer.

I get the feeling a few areas are underrated. He's not exactly a powerhouse but he can hold his own in a physical duel, a 76 for Balance seems a little harsh considering his size. Also he appears to be a better dribble than this, both in terms of DA and DS. He's got the ability to take players on, showing a good degree of close control aswell as pace.

Isn't he a slightly better short passer than this? I agree with previous suggestions of a 1 point decrease for SP aswell as FKA to around an 80 and a bump to his Curling. Anyone got any thoughts on his Header/Jump? Is his Header this bad? I think his Jump could come up considering his Height. Aggression could probably come up also.

His Condition could be bumped to a 7 easily, he's played pretty much all games this season I think.

Anyone got any thoughts or further ideas on anything suggested or otherwise?
Alf Ramsey: "I'll be watching you for the first 45 minutes and if you don't work harder I'll pull you off at halftime."
Rodney Marsh: "Crikey Alf, at Manchester City all we get is an orange and a cup of tea."
Top

Perhaps a bump in teamwork? His link up play with Pienaar on the left is always outstanding.
Everton F.C.

I agree with everything execEPt the decrease in SP, an I would like to add a bump in SA and ST in as well
Top

I'm just not sure he generates that much venom in his shots to warrant the current 87 Stu, he's sitting level with the likes of M. Petrov and Wazza. What were you thinking for SA/ST? I'm not so sure about SA, he's already on par with the likes of Diaby, O'Hara and Richardson. Any higher and he'd sit level with players like Modric, Downing, Pienaar and Lennon all of whom I'd rate above Leighton. I agree his ST could come up a bit though, he can strike the ball nice and cleanly.

I forgot to mention Mentality before aswell, I'm sure that can go up. He's quite a gritty player, usually still fighting late into games (maybe a slight tweak to Stamina also?).
Alf Ramsey: "I'll be watching you for the first 45 minutes and if you don't work harder I'll pull you off at halftime."
Rodney Marsh: "Crikey Alf, at Manchester City all we get is an orange and a cup of tea."
Top

There are more important issues than his shooting stats, in my opinion. His balance most certainly has to come up, he can certainly hold his own against the bigger wingers in the Premiership and is by no means a pushover, he could certainly go up to at least an 80 value, if not one higher. His stamina has also been touched upon, and I would certainly support a raise in that area, he has a very good ability to keep moving down the flank right to the very end of games, the ladder has a fair amount of tweaking that could be done, but I feel he could quite fairly sit on an 88, one below Matty Etherington.

His agility needs to come up too, his twists and turns are not only a help when keeping up with wingers clever tricks in defence, but also on the offence. One only has to look how he confuses his marker with clever changes of direction to find free space, although this can sometimes be misinterpreted as attacking intelligence. His DA could come up by a bit too, not too much, I was only thinking about two points, as he doesn't have the complete lack of control as say, Djibril Cisse, when he is running with the ball (although one could argue the case that he should be even lower) his DS could also come up to about 82, as he Baines keeps a decent level of speed whilst on the ball. All his passing stats could do with some tweaking if I'm honest, his link up play with midfielders is very good and I don't need to mention how good his crossing has been this year, I say we could up his SPA by one, and SPS by three, making him ever so slightly better in the speed department than Keiran Gibbs.

His crossing is arguably even more in need of a boost, I don't know the exact total of assists this year, but I'm sure it's a fairly high number, and the vast majority of those will have come from his crosses from the left flank, his crosses really are of the highest quality and have a very good deal of accuracy behind them, I could certainly see him sitting level with Bosingwa for his long passing stats, but his LPA and LPS on an 84 and 85 respectively. I'm also surprised his FKA has stayed this low for so long, even at Wigan he was known as a decent set-piece taker and often troubled goalkeepers with his free-kicks. I could see his FKA sitting at an 82 value, and his curling at 85, and that's not only for the dip he gets on his free-kicks, it's also the fantastic swing and bend he gets on his crosses, I could quite happily see him go a few points higher than 85. His header and jump could also be raised, he's not completely incapable in the air. I could see his header and jump each going up 3 points.

His mentality was touched upon by Deity, and once again I feel it is a valid point. Like most of the Everton team, Baines has a good work-rate, he keeps fighting until the end and has little trouble coping with fatigue, I could see him sitting on an 82/83 value which would put him either on par with Figueora and Mears, or Sagna and Belhadj, depending on the valuation. Furthermore his team work is also worth raising, I mentioned previously how good his link up play and crossing was, and quite a large percentage of this is not only his passing ability, but his vision. His ability to spot a pass, his decision making of knowing where a player is going to run into and then on top of that, have the actual ability in his feet to make it happen, in this area he shouldn't be too far off the top of the SB ladder and could easily sit at an 83 valuation, on par with Evra and Young, if not higher. As far special abilties and cards, I feel both his current cards could go, he sometimes now has a tendency to cut inside and whilst Baines' long range shooting is generally good, he doesn't exhibit it often enough to warrant the star/card, in my opinion. I do however feel he could qualify for 'Overlapping Run' due to his fantastic burst forwards in order to support the winger which he has showed countless times this season, as well as 'Early Cross', which is fairly self explanatory.
"If you are first you are first. If you are second, you are nothing" - Bill Shankly.
"I guarantee fourth place" - Rafael Benitez.
Top

I'm putting the suggestions into the form of a set at the moment to make it easier viewing. According the Everton site he's actually even smaller than this (170/70 to be precise), does that sound right? I'd easily go for the higher of your proposed Balance values if that were the case.

What are your thoughts on his current ATT:DEF?
Alf Ramsey: "I'll be watching you for the first 45 minutes and if you don't work harder I'll pull you off at halftime."
Rodney Marsh: "Crikey Alf, at Manchester City all we get is an orange and a cup of tea."
Top

I think the current valaue for height is correct, I haven't found any pics to suggest that he over an inch shorter
Top

A reviso of my prev suggestions

ST I see on a green value, a point is his speed a touch low or am I going mad?
Top
Post Reply
127 posts