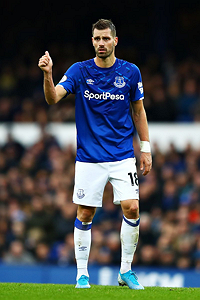 almost the same thing which i've said about Davis can be applied to Schneiderlin, of course Schneiderlin plays a much more deeper role but that doesn't limit him to move further up the pitch as he likes to takes shots from long range and mostly spread play to the wings with long balls. For starters the ATT/DEF ratios is wrong as he's definitely ATT>DEF and the same goes for his orientation, it should be BAL not DEF. a quite well rounded deep-lying playmaker and for me, he both exceeds in the attacking and defending compartment, though slightly more offensive than he is defensive.
Now coming onto his BB, he ain't as strong as that 82 makes him, he's more relaxed and doesn't really use his body strength to tussle or outmuscle opposition from the ball nor does he posses any kind of sheer energy or balance when trying to hold up the ball, he's simply a bit higher than average, 78/79
Regarding speed, i believe it could be taken down a couple of points as well, the combo of 79 and 78 plus DS 78 just makes him too fast overall.
Definitely better ball control and dribbling ability than the current and i'd dare to say "reserved" value of 76, he isn't far from Davis.
I've already mentioned his great range of passing and passing preferences and although he doesn't rack up that much assists his passes are always deadly accurate and find their target on a regular basis and more importantly, they're not "soft" and easy to intercept as he tends to give some proper weight on them.
Moving onto his shooting, and as i said in the begin of t he paragraph, the boy packs a nice shot on him and doesn't shy away from hitting them from long range, the accuracy might not be there (it's surely lacking), but the ability to hit the ball properly and keep it down and "strong" is quite decent at least.
Heading is overrated as he's fairly poor at it, but he can jump decently...
MENT, same reasoning as for Davis...

updated, think those values are a little inflated, specially as we now agree a competent passer no longer needs yellow
Top

my post somehow got deleted....probably i fucked up something again as usual

anyways i've given him an update as he's been sensational (again) and is the clubs top performer alongside Lambert and Lallana. his passing was is great and safe and he makes a significant impact on the defensive end and is really a magnificent long passer creating numerous opportunities for his teammates.

Schneiderlin's the best tackler in Europe:

Really impressed by this guy, against Liverpool he had a great game. Some points I'd like to make:

I won't make any suggestions about his defensive qualities as I haven't see him enough and he has some great statics, but his attacking intelligence was what impressed me the most. He did some excellent moves and trough balls; he seems to get into some great positions, which is rare in a holding midfielder.

His tech didn't look this low to me, didn't notice any problems controlling passes and made some very decent traps.
Top

why is he not updated in almost TWO years, and noone writing anything in this thread, it is such a shame, this player is excellent in his position, he deserves better stats.
Shollym Patch PES6:

Shollym wrote:why is he not updated in almost TWO years, and noone writing anything in this thread, it is such a shame, this player is excellent in his position, he deserves better stats.

So, do you have any suggestions or just talking nonsenses? This set looks pretty fine to me, just need some minor tweaks. I think that his ACC is better than TS, he often knows to go forward and have nice acceleration but that's all, he isn't so fast player. Also *Sliding could be added, and little raise to his BC to yellows would be nice. Here's nice examples of what i'm saying:

nonsense... no I dont have any particular suggestions in EPL section, I only point out when I think a player is heavily overrated or underrated.

p.s. I can bet this thread will be full of fan boys comments to raise his stats if he joins Arsenal this summer.
Shollym Patch PES6:

Schneiderlin's been in really nice form, think he's been as good as Matic this season. Gonna make a move to a big club this summer surely. Stats don't mean everything but you can see he's a very solid player. not been updated in 2 years and he's come along way.. def and response should be higher, he's breaking up play really well.
Top

His DEF and RES should be on pair with Matić
Top

Such a good ball-winner and tackler... Defence seems better than that(about 80), and similarly, Body Balance should rise to about 83.
Probably, Explosive Power might also rise to Top Speed levels(77-78). He is really agile for his size and position, for example what he did to Yaya Toure when he was at Southampton.
CMF a must as Secondary-Position.
Top

Such a good ball-winner and tackler... Defence seems better than that(about 80), and similarly, Body Balance should rise to about 83.
Probably, Explosive Power might also rise to Top Speed levels(77-78). He is really agile for his size and position, for example what he did to Yaya Toure when he was at Southampton.
CMF a must as Secondary-Position.

I think that he proves in every single game that he plays that he is just what United need and lacked for years, and even Vs Arsenal when he didn't played.
A top tackling midfielder, who can do anything on the pitch: mark, tackle, create, score... Possible upgrades like what I suggested above?
Top

Such a good ball-winner and tackler... Defence seems better than that(about 80), and similarl

This sort of over-rating nonsense is a blight on PSD and really needs to end. Hes played 9 games now, that post was a month ago when he'd made what...4?

And I'm specifically talking about a player having a set that fully represents him already and then this lets increase him by +2 for no fucking reason to immediately make him one of the best of all time in that stat... after no more than a month into the season. Our whole board is massively over-rated due to this codswallop. We need to tone down sets, not just make them better and better just for the sake of it. Our goal is REALISM, not make everyone better than they already are. I am really, really tired of seeing this nonsense everywhere I look.
Top

I've reset the values to what they were beforehand and can only apologise for making a hash of everything.
Top

Well then if this entire board is overrated, why not start a discussion in the mod section pointing out where we are going wrong? How can we fix it if we don't even know we are in the wrong?

@Welbeck don't worry about it, I must be wrong for putting Matic on 80 last season as well
Top

his passing isn't very consistent... van gaal dropped him because he was messing up basic 10 yard passes which is a no-no in his system. and the playmaking star doesn't really suit because Schweinsteiger is a much more ambitious passer at Man Utd by far and he doesn't have it
Top
Post Reply
42 posts