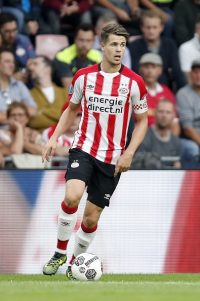 Already at the age of 7 Marco van Ginkel was scouted by Vitesse. The youngster made some impressive performances in his first season including a goal against Ajax. Although his main position is offensive midfielder he has been used as a striker when needed and not without succes. Five goals in his first full season for a player of 17/18 years old is not bad at all! Van Ginkel is best described as an attacking midfielder with some pace, a solid shot, gritt and theability to evade the opponents defence by making good offensive runs. A kind of similar style as Wijnaldum but with less dribbling but more determined imo. Almost all his goals come from inside the box so that's why I gave him a relatively low SP. As he seems to finish his chances quite easily his SA and ST are both high for such a young AM but I feel he deserves them. There are not many players in Vitesse's squad who make their goals as clinical as Van Ginkel does. The high aggression and mentality represent his penetrating runs and determination. I feel the high MEN value is important because this is what makes him stand out compared to other players his age. He is so mature, determined, consistent. Van Ginkel does quite some running is certainly not slow although he does not outrun his marker easily as well.

Please post your suggestions. I found it very hard to rate Van Ginkel properly as i did not want to overrate this young player but already he is quite important in Vitesse's squad. Furthermore he is a kind of strange player for he is mainly a midfielder but when used as a striker many times and playing quite well. Therefore I think he can still use some tweaking.

I wonder why his TW is this low, he was all over the field yesterday, really a dynamic midfielder, he looks mid yellows to me...

Agree, should be yellow. What value do you suggest?
Top

meh, I think 83, have to watch him more to come up with a better number...

He is very dynamic, but he is not too much of a team player/playmaker. At Vitesse he has game where he touched the ball only several times (see my post from february in this thread). 79/80 is fine to me. This EURO U21 he is playing really well though.

TW relates to off-the-ball movement, so the number of touches he had really doesn't matter, that's more a case of being in the right place at the right time...

Well what I meant to say is that appearently he is not really moving really smart or getting in the right positions (in midfield), otherwise he would be receiving passes more often and contributing more to the team play.
I feel his moving is largely "vertical" (from box to box) and not so much about finding smart positions in midfield to recieve and pass the ball.
Top

The description actually makes me think more about Attack. I see Att as attacking intelligence, positioning and amount of danger.
Top

FernandoA13 wrote:Now how PSD rates ATT i think he should be yellow.

I can see that. Any value in mind or just 80 for now?
Top

FernandoA13 wrote:Now how PSD rates ATT i think he should be yellow.

Its a bit hard to judge if his off the ball movement/creating danger is really that good or the marking in Holland isnt good and he is above average in choosing posistion.
Sporting Clube de Portugal meu amor / Working on new sets and updating Liga Sagres
Top

Too soon, too soon.
Top

Now it is official.

Far too soon, mourinho promises him playing time, and that actually worries me very much...

Agree it's too soon. It would've been better to wait one more year and play every match with Vitesse.
Top

what amazing passer. today he played a nice match . he passed and passed . today he made me amazed.
Top

really outdated set, surprised this doesn't even reflect his more than 'good' season on psv, also, he weights 82kg.
Top

This will be the season to find out if he's gonna do anything. Has qualities but maybe not Chelsea caliber. Not sure tho.
Top
Post Reply
40 posts