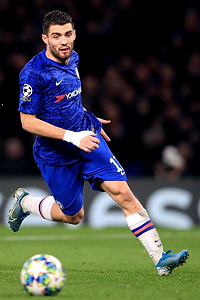 Which stats you think are overrated? He's called here "Croatian Messi", not only by his size he looks like Messi, but he's playing style is also similiar to him.

He's the youngest player to play in Dinamo Zagreb's history, youngest scorer in Croatian League, and I think even youngest player in Croatian League ever.
He's got a phenomenal first touch and dribbling, good passing and great agility. He's very young, so his attacking and teamwork skills aren't so good, nor his tenacity and also his balance because he is very small and light. I'll post soon a detailed description for him

MocaBG: "I am the only one here that is folowing our football and who knows to rate players corectly!" LOL
Top

Is this the kid Arsenal (amongst others) have been looking at?
Alf Ramsey: "I'll be watching you for the first 45 minutes and if you don't work harder I'll pull you off at halftime."
Rodney Marsh: "Crikey Alf, at Manchester City all we get is an orange and a cup of tea."
Top

And many other clubs yes. Before a year or so, Ajax wanted to buy him, but Mamic sayed that he's a great talent and soon he'll be playing for first team. Guess he didn't lie about that.
MocaBG: "I am the only one here that is folowing our football and who knows to rate players corectly!" LOL
Top

Looking at these, why the fuck did we not get him? First we missed out on Messi and now this kid. Damnit.

Mateo wrote:He's very young, so his attacking and teamwork skills aren't so good [..]

His current values in ATK, TW as well as RESP are still outstanding for a 16 year old AMF.
Top

Age doesn't matter. And this values aren't so high compared to another great young AMF, Canales.
MocaBG: "I am the only one here that is folowing our football and who knows to rate players corectly!" LOL
Top

Age does matter. His response is very high for an inexperienced 16 year old AMF and it's an area where you usually need experience. The same goes for teamwork and probably attack.

To be honest, I have to agree with SCR on the matter of Response. Experience does play quite a big part in a player's responsive behaviour and whilst it is true that this should not be completely based around age, it still plays a part. Younger players usually have a lower value for this, because they do not show the same awareness on the field that more experienced players do have.

The same goes for positional stats like Attack and Defence. Youngsters are usually not that familiar with taking a quality position in attack and defence yet due to their lack of experience and are thus rated lower than seasoned veterans. Which is realistic.

As team work, I don't agree that it is in particular related to age. That has more to do with a player's understanding with his team-mates, which can already be good at a young age without much experience in the first team. Any player can communicate and understand his fellow players well, or not. That's more so a maturity issue, hence younger players usually don't get a high rating for this but if a youngster is already mature at an early age it's very much so possible.

Anyway, these are just my views.

Ok then, I'm going to decrease attack, response, tenacity and teamwork by 1.
MocaBG: "I am the only one here that is folowing our football and who knows to rate players corectly!" LOL
Top

Although I believe that most of the Dinamo stats here are overrated, not much, but still (when I updated Dinamo with them I was able to kick out Inter from champions league and play 1:1 and 2:2 against Barcelona(they scored two away goals so I lost) playing with the toughest difficulty, and I 'm not that great a player. I'm pretty sure that this generation can't do that. Also comparing Morales, Sammir, Rukavina and some others to former Dinamo players and Croatian national players like Eduardo, Modrić, Kranjčar, you can either think that Modrić, Kranjčar and Eduardo are underrated or that these three are overrated) But in this case do believe that he is not overrated. This player was targeted by great teams when he was only 12 or 13, but his father wanted him to go to Dinamo. Also a few weeks ago against Varaždin he almost scored(he hit the bar) from great distance and difficult position. Not to mention that his passes and free/korner kicks are above average even compared to older and more seasoned players. Anyway you get the general idea of this kids' abilities.
Top

I think that's true.
Dinamo lacks every Europe League against B-Class Teams and this should be a good Indicator for the real playing ability of this team.
Most of the Stats here are just a tweak overrated.

This Player isn't better then Kakuta for Example
Top

Well, a part of the problem were bad coaches, but just wait, if Vaha continues his good work Dinamo will rise. We were great in Europa Leauge and he was leading us for only 4 months and he didn't even went through pre-season preparations with us.
Top

Looks like a real wonderkid. I try to watch more of Dinamo. I heard Real Madrid and Man Utd are after him.
Sporting Clube de Portugal meu amor / Working on new sets and updating Liga Sagres
Top

- his dribbling is underrated, he's worthy of an 84 in both DA (even 85) and DS
- curling is also a safe update to mid greens, considering that when he plays in HNL and Sammir isn't included in the squad he is the first pick at set-pieces
- ATT could be 74, but it's just a thought
- RES should be lowered to 74/75 considering the current new rule on the site and the "new" definition of the stat

are there any compilations out about him?
I'm against you
Top

Nah, but on youtube there are some of his goals and actions. You can also watch him tomorrow against Lyon

And I've got to say, he's probably the best 17 years old player there is right now.
MocaBG: "I am the only one here that is folowing our football and who knows to rate players corectly!" LOL
Top
Post Reply
302 posts