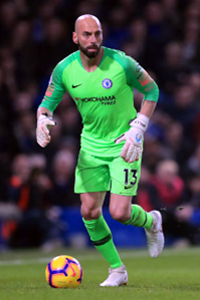 As for the rest, I have him on BB 84, AGI 76, Jump 83, Ment 80 and TW 75. Not very physically dominant in set pieces, slightly better than i.e. someone like Casillas but just that. Jump is just fine, good but not great (the actual combination between great reflexes and pretty decent jump is what allows him to do some eye-catchy aerial stoppages from time to time, like i.e. the one to Bojan's shot). Regarding TW... I don't really see him higher, has some issues with coordination with other players sometimes, needs to talk more, needs to shout more IMO.

If he doesn't get a call from the argentinian NT, I'll think someone is doing his/their job wrong.

vinnie wrote:He's galaxies ahead of Romero. It would be a bit less then catastrophically suicidal not to take him over Romero.

Romero is very inconsistent keeper while Willy seems to be the opposite in that area. If Willy isn't selected by Argentina, it would be a big mistake and a big loss.
Top

If I wanted you to understand, I would have explained better.
Johan Cruyff
Top

Brilliant update, he deserves it.
Top

No words for those saves

when I suggested an update I wasn't hoping for such a big one, but he deserved it, so good job

Very good update but IMO Romero's handling and KS are better than Willy's.Romero suffers sometimes from confidence,inconsistency and for sure ushing out.Don't forget the defenders that each GK has infront of him and how that affects his play.Even though i think that Willy has made better work on that aspect than Romero with far better communication and organization.Willy deserves a call up to the national and Romero an update...
PANIONIOS RULES.GENOVA E SOLO BLUCERCHIATA - FORZA SAMP.
GLORY GLORY FOR UNITED!!!
Top

Now he is not only Argentina`s best keeper by far but inside top 10 all around the world. Really strange he is not even secound or third keeper in Argentina national team , with his currently performance he should be immediately playing as first choice. Personally still not so sure with defence 96 it looks a bit too high.
When di enemies ah pree
An ah bun back fire
Mi tek everythin to Jah in prayer
Long time dem nah like mi
Di tings dem transpire but Jah is my everythin an I am mek mi higher
Top

three points thanks to Caballero

he must have a problem with the coach of Argentina, is a hero
Top

Was planning to do a comp video myself... will probably do anyway

Was making the comp but had trouble with the second video file... in any case, there's something already on youtube. Low quality and absolutely noobish video editing (seems to have taken the vid directly from Marca), but heh, better than nothing I suppose:

Video ends at 0.53 but the song keeps going lol.

Actually It's nothing. Mediapro deleted the video

It's not deleted, but you have to watch it at the Youtube page. Learn to read Fix

Will leave just the link btw.

Noticed he didn't have *1-on-1 keeper and fixed straight away.

he was once again amazing in league match vs A. Bilbao, I'm really a big fan of his GKS
the elastico master
http://www.youtube.com/watch?v=LXqPEpeokCg
Top

this guy was underrated before, was a regular GK now with a great season, or is pellegrini's magic that make him one of the best in the world?
Bloody Curse!
Top

He's always been great, but he joined a team that is currently on the elite so he's known world wide now.