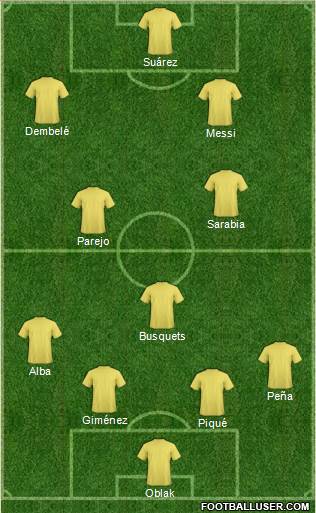 Ibai for Muniain, then?

This team has 30 players in total , i suggest to add Di Maria who is having a great season and Pepe or Alexis Sanchez to be a team with 32 players .
PMTP & Mia San Mia
Top

Attention, this just in!

What do U guys think?

What about an update?
Sorry for my english!

I will give it a whole overhaul tomorrow morning, I just don't have the time right now. If I don't do it before 11 PSD time bump this thread.

It's harsh to replace one of Valdes/Caballero, but i needed to put Navas in the first team. Valdes was arguably the keeper of the season for the first half of the season, but his injury has made him miss 12 games, 12 games in which both Caballero and Navas continued to be excellent.

I think Navas is the best keeper of La liga this season, but Courtois should remain on top, both for the fact that he has more overall ability, and that he was the keeper of the world, he had an excellent european campaign as well. So i've put Navas in the first team as back up.
If you don't put effort into your post, i won't put effort in my response.
Top

I think we switch Mikel Rico to reserves, he's been really good the second half of the season too, but not as impressive, and other players could deserve his place. Easily. So so outdated, please do something quick
Top Pique needs to be in now.
Top

The Rodrigo change seems right, Thomas has had more appearences so its a tough one. Regardless, Giménez deserves the starting spot ahead of Godín imo.

Fixer wrote:The Rodrigo change seems right, Thomas has had more appearences so its a tough one. Regardless, Giménez deserves the starting spot ahead of Godín imo.

just as the pl all star i ended up picking up a small amount of players and now i added a few more.

any more suggestions would be appreciated.
Top
Post Reply
134 posts