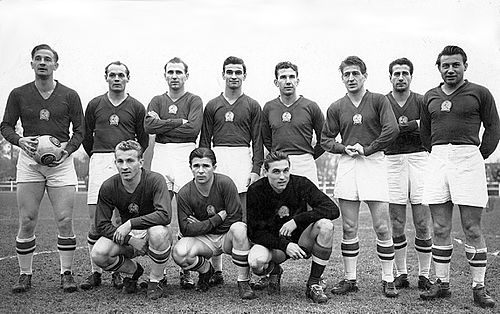 You should also consider...

investigate about them (or at least some of them)

I dont really think istván Nyers diserve a place in this team...

(PS: he scored to goals for hungary team, though)
Top

If Nyers with 2 caps is here than Varga must be also. Zoltan was fantastic player but was never trully recognized due to his
"off-field" activities with taking bribes, which overshadowed his great career and outstanding talent. He's still a legend among
Borussia and Hertha fans although he had short spells there.
CUORE ROSSONERO
Top

i think could be nice to have two or three defenders more...if possible i'll give you money

I think Hungary in 54 World Cup is the best team ever, even better than 70 Brazil. I love Hungary so much and has made the Claasic Hungary in Winning Eleven game, of course I edited their face by myself.............

My Best Ever XI:

Dude, what in god's name are you doing? Every All Star team is being flooded with ill-considered posts, and why do you type in ALL CAPS DOES IT COMMUNICATE YOUR MESSAGE BETTER?

Kubala played 3 matches for Hungary, http://www.rsssf.com/miscellaneous/kubala-intlg.html , why would he be on this team? Are you going to go to Juventus All Star team next and suggest Cronaldo should be on the Juventus All Stars?

Just cuz Kubala's mama birthed him in Hungary means nothing, he has to have actually contributed to Hungarian National team success in some way to be considered for this team...this is not some royal house where some bloodline gets you on the team automatically.

Same deal with Gerrard for England, very talented player - maybe best CMF in our generation - but what did he do for England, continually remained an unfulfilled promise - England were stacked with players in his era and they all under performed.

I am not trying to take a shit on your head and discourage you from posting, but please make a thoughtful post about why your selection would be different. I am not saying your wrong in all your posts, but you ALL CAP SPAMMING is not giving any of your posts any weight/credibility.
Top

this dream team is that "dream team" maybe you dont get it , i dont know why this kind of LETTERS can offend you, for me kubala played in hungary national team, because of extra sporting factors he didnt continue (you can read his background if you like), if you dont like debate that is your problem ok man, so please this shit ( ill-considered posts)is out of place, i dont know what are you trying to make by that, please if you dont like debate close the forum, i only put my opinion that is all . gerrard he was a very important man in england i consider him in my team thats all , i am not insulting anyone, i am only writing what i consider should be the team . thanks and grow up.
Top

I was not aware these were "Dream Teams", I was under the impression they were a collection of players who made significant contributions to the teams they played for. In a pure Dream Team where eligibility is more lax as you just want to include the best possible players then yeah Kubala makes sense.

Yes there were external factors that stopped him from appearing more for Hungary, but you cannot assume had there not been he would have been a national team legend, He could have sustained a broken leg in his 5th appearances for Hungary, and with the crap surgery of those years be like Lubanski and only comeback years later a much diminished player, if at all. Counter factual history should not factor into his claim for a spot.

ALL CAPS letters in internet language means you are screaming/yelling your point. They are also more difficult to read as there is less contrast amongst the letters. Please debate in a civil manner.