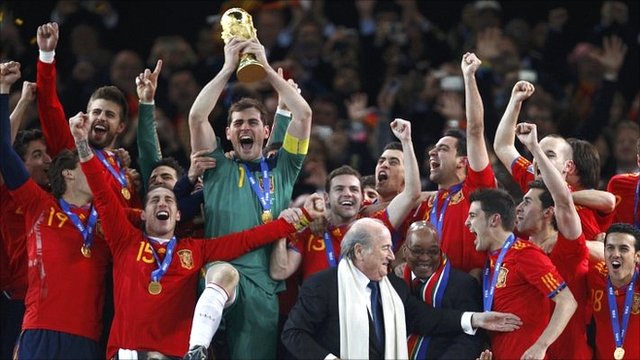 Can't see the Makelele-Senna comparison, but Senna absolutely deserves to be here, agree.

OK, maybe he wasn't quite the anchor man, but what I meant was that whilst there were more gifted players on the field, there were no more important than Senna.
Top

and where is Carlos Santillana?? for me is one of the best strikers of Spain
Top

BTW, not so sure about Senna, nor Busquets... I mean they deserve to be there and X. Alonso doesn't?

Replace Busquets. He doesn't even deserves a place.
Top

Yeah, I also would give a chance to Xabi Alonso before M. Senna and Busquets.
Does D. Silva already deserve a place in the 23 squad? I know he had an awesome season for M.City and the national team, but I don't feel the status of a Iniesta or Xavi in him yet.
Again L. Suarez as DM? Why place him out of position (worst yet because the team has only 3 defenders)? It's the same as placing Didi as only DM in the team. This gives an unbalance to the team.

Also, there are 11 players in the reserves list, when the maximum is 9.
In the teams I made I solved this problem with a "honorable mentions" list.
Something like this:

I cannot agree that Pirri has missed out on a start here. He was the greatest player spain had in the 70s and was pivotal at Real Madrid too. Guardiola was great, but Pirri was an all time great, and the squad isn't exactly lacking creativity and the need for a playmaker. A safety net in front of hierro would play better too.
Top

YEAH, DI.SILVA, AS GREAT AS HE IS HASN'T DONE ENOUGH TO WARRANT A PLACE IN THE TEAM, MANY, MANY PLAYERS HAVE DONE MORE THAN HIM
Top

Drop one of the keepers and promote Basora, 3 keepers in the first team is unnecessary.
Top

Watching extended highlights of the '64 European Championship final against the USSR (what else is there to do at 4am on a Friday night?), glad to see Amancio is in the team, real stand-out player. Much more so than Suarez who I was expecting (having actually known of him beforehand) to be the one running the show. Would be interesting to see a proper set for him, looks a lot faster than the one there at the moment. Quite surprised to see Pereda not getting any mentions. Scored the first and set up the second and had another goal disallowed! That said, I'm equally surprised to read he only actually got 15 caps overall. Talk about making the most of limited opportunities!
"DEBT IS THE ROAD TO RUIN" David Gill August 2004

For me, the three best spanish goalkeepers of all time are Ricardo ZAMORA, José Ángel IRÍBAR and Luis Miguel ARCONADA. Íker CASILLAS should be the fourth instead of Andoni ZUBIZARRETA.
Top

well, good team, but, and Peiró? not good? don't have much caps, is true. but is a great player.

at least among the reserves, rather than Senna.
Top

I saw a few days ago the career statistics of Pep and Luis Enrique and both have similar numbers. Well, Luis Enrique played more and scored more goals. This made me think that, maybe, he deserves to be in the 23 squad more than Pep. Seems that Luis Enrique's international career was more regular.

Even, being more rigorous, I would say that Senna or Busquets can take Guardiola's place too, over Luis Enrique considering their achievements. although in the case of Senna, this would be controversial because of the small number of matches played compared to the other players mentioned before.

Maybe some spanish mod/user could know more about this, would be great to read more opinions about removing Pep and put Luis Enrique or Busquets.
"Technique is not being able to juggle a ball 1000 times. Anyone can do that by practicing. Then you can work in the circus. Technique is passing the ball with one touch, with the right speed, at the right foot of your team mate."