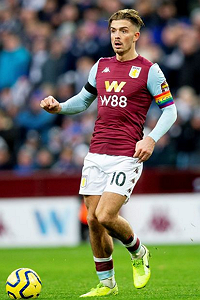 His Body Balance could increase by a couple of points. He has a well-deserved reputation for being very tough to shake off the ball, despite his apparently slight frame. Sherwood is always alluding to his "big legs" in a homoerotic way: "'He’s very durable,’ said Sherwood. ‘You should see the size of his legs, he’s still a kid.'" Grew up playing the physically tough sport of Gaelic football to a high standard too.
http://www.dailymail.co.uk/sport/footba ... l-win.html
Top

Jack is due for a good update and I am going to try and articulate below. First off, this guy drifts all over the while on the attack, but lines up as an AM and should have that as his primary position. Never really making runs into the box unless he is dribbling, he prefers to offer himself as an option just outside the box to then create something should the ball come to him there. He is a really strong dribbler and it is what first got him praise as a teenager breaking into the Aston Villa team when they were still in the Premier League. He is also skilled at short passes, notably those that count as key passes and create a lot of danger such as this one https://youtu.be/DxMpy5D3Oo8?t=180. Some weaknesses are that he is a really poor tackler and racks up yellow cards at a rate higher than he should. His free kick services are good too as seen here https://youtu.be/DxMpy5D3Oo8?t=493 https://youtu.be/Y-VlxjkU6wo?t=416 and https://youtu.be/vCPgFoKHSIM?t=487 or when going for goal https://youtu.be/RVwK8h2abEk?t=191. He can pop up with the occasional good run like https://youtu.be/vCPgFoKHSIM?t=215 and https://youtu.be/Y-VlxjkU6wo?t=57 but it is infrequent. He gets the ball and slows down then tries to get the defender to commit with a head fake usually and accelerates the other way in a bit of a jerky motion. Very much a start-stop type dribbler in the final third as he will advance it a little and then look for the passing options instead of just putting his head down as Bolasie does for instance and barrels ahead blindly. Jack draws a lot of fouls this way too. He is a good young player that rightfully draws a lot of speculation that he can and should move to a good Premier League side and I hope he gets the chance to.

Nothing much to add other than he scored a rocket of a volley yesterday.
Top

Gets attacked by a fan and then nails the game winner in the derby he has grown up dreaming of all his life. Not a bad way to end that day. He is an odd one to rate. My comments from before still are true but he might be an even lower Ds and sps player. They’re just little flicks mostly. Anyone else been watching?

Edit: going to post below to not totally dominate his thread.

As noted, his dribbling style is very unique. He is jerky jerky (my apologies for all those that phrase won’t translate for) and does a lot of lay-off passes. They’re mostly simple roll backs. One thing I really like about him is his movement. He is a supportive player and extremely good working in combination play. I believe it was against Derby County recently where he was just slicing them up. He’s returned from injury at force and was just dominant that game. He had some really damn good splitting passes and shots himself as well. If I recall correctly he finished with 2 goals and potentially an assist (he should’ve had one if he didn’t get it). I can go back later and link some of the specific videos, but here is the game highlights https://m.youtube.com/watch?v=DHJ1kCx5GZM
From my previous suggestions I might give him a point more in att and give him a little bigger gap between ya and acc, but still this works and I’ll be trying to confirm and allow him more time after the injury to get it completely back.
Top

https://youtu.be/CwgqpkOlngc?t=498 here is another type of pass, extremely simple but efficient, that he does a lot of. Little cut pass after drawing in multiple defenders to him that finds a teammate in an open area resulting from his dribbling.

Edit:
He was fouled an average of 4.8 times per game with the next highest player in the league only suffering 2.7. This guy takes a beating and is really good at winning free kicks and getting himself out of trouble.
Top

Should have SMF/WF as playable positions
Top

For sure, his curling is too underrated. Low green looks fair for him.
Top

To represent better the way he plays, i think we should give him *Trickster and *Malícia, maybe *Mazing run too?, he does pass the feel to me that he can manage to get a foul in any instance.
Top

Dío wrote:To represent better the way he plays, i think we should give him *Trickster and *Malícia, maybe *Mazing run too?, he does pass the feel to me that he can manage to get a foul in any instance.

Mazing run is a must I would agree in addition to your card suggestions. This guy is amazing at drawing fouls. He drew by far the most in the Championship last season despite missing a lot of time injured somehow. He creates a lot of danger just by getting fouled in dangerous areas a lot.
Top

Really love the way this guy handles the ball. Not sure that qualifies as high DA, but all the little things he does, the way he uses his body when he drives the ball, awesome retention really.
Everyone knew it was impossible. Then came along a fool who didn't know it, and he did it.
Top

Ocrin wrote:Really love the way this guy handles the ball. Not sure that qualifies as high DA, but all the little things he does, the way he uses his body when he drives the ball, awesome retention really.

100% agreed, he just avoids pressure so well and draws fouls. Does all the little things to make an impact. He knows when to slow down to draw the contact, knows how to make a little fake to get a defender to jump and then skirt by the opposite direction. Hard player to rate with stats, might be an abundance of cards and stars?
Top I like this set, but I think his SA and ST are a little better than this. He already has scored 8 goals this season (the best goalscoring season of his career).
Maybe low 70s in both SA and ST can work it.

SA: 72
ST: 74 ( Some good ST in this video https://www.youtube.com/watch?v=VSqfep-58tI )
“Our football belongs to the working class and has the size, nobility and generosity to allow everyone to enjoy it as a spectacle.”
Cesar Luis Menotti
Top

Oh that Tech needs to go up a good solid bit.
Top

He's one of those players who's value you can't really quantify in stats. Very good player and would be a shame if no one buys him if Villa go down again.
Top

godsplan wrote:He's one of those players who's value you can't really quantify in stats. Very good player and would be a shame if no one buys him if Villa go down again.

Exactly, but with that being said he can safely get an attack raise to bordering yellow and a little higher technique. Dribbling for me is really hard to rate, and especially his intelligence of knowing how to draw fouls. Body Control would be something I rate highly of his for instance. What are your thoughts on his shooting?
Top

How does he have 60s in shooting hahahahah
Top

What are your thoughts on his shooting?[/quote]

I think both SA and ST are both in the 70s. Technique should be mid 80s easily.

And if Maddison is on 83 att then Grealish should be on at least 80, as I think he's the better at creating danger between the two, considering what he has to work in terms of teammates.


Passing and dribbling are a bit tricky to rate (especially the former) but I think both are fine with SPA probably getting a slight slight upgrade probably something like 80 or 81.


Thoughts on mentality? He's a piss boiler in the mould of Wilshere or the great Gazza.
Top

Yeah I was at the 79/80 split for attack. Totally forgot to address shooting, but he can pick his spots well and is improving in that aspect, low 70s would be my recommendation (72?). Mentality definitely underrated, last year a rival Birmingham fan rushed the field and straight up hit him, but Grealish kept his cool somehow and drilled a game winner in the faces of Birmingham. He used to be a bit of a piss ant, but now hes got some metal to keep it together.
Top
Post Reply
30 posts