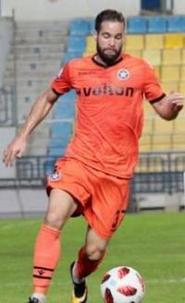 on my opinion the best new right back ... he surely need an improve...
Top

Gave him and Tasoulis an update.

Technical and Mental: Vlachos is a more refined player,both in his technique and his intelligence when he is on the Attack,yet his offensive game is reserved ,or minimalistic is a better word.His short passing is safe,his crosses efficient with good form.His best feature statwise is his TW,despite his lack of aggression he provides good support in his flank and defensively he is one of the most reliable in the league in covering his side.On the other hand Tasoulis relies more on aggressive marking and while not as tactically apt as Vlachos he is a better tackler.On the attack Tasoulis is more present and active,his short passing is more adventurous than Vlachos but more erratic as well,his crossing accuracy is unimpressive.I like the better Ment value of Tasoulis to show he is less gifted but more zealus and despite some awkwardness on the ball and worse tactical awareness a more productive player than Vlachos a lot of the time.

Speed and Physical: Tasoulis is more active than Vlachos thoughout the game, faster and more agile and despite a lighter build resilient in physical confrontantions.While Vlachos has good speed over distance he has a heavier build and is neither explosive nor agile,he doesn't utilise these aspects much anyway.

I find them to be an interesting duo and adjusted the sets to show off their differences more.Vlachos might deserve a little better passing accuracies and a little more aggression while Tasoulis can have the offensive fullback card,but i like how they look now.
Top
Post Reply
3 posts • Page 1 of 1