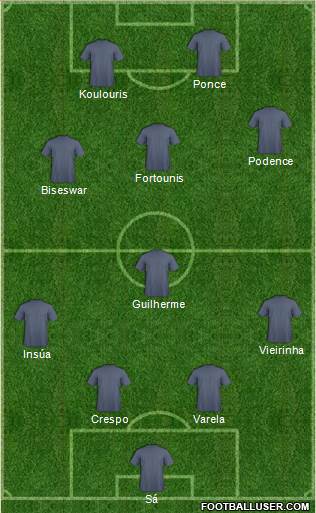 Here's mine (don't mind the system much , it's just meant to fit them all in )


What's your team of the season ?

Well, Milivojevic just played the first half of the season at Olympiacos; then he joined Crystal Palace in January... Wasn't there any player who matched him for the whole season?
"Willy Wanda is Chinese!!!"
Top

KeyserSoze wrote:Well, Milivojevic just played the first half of the season at Olympiacos; then he joined Crystal Palace in January... Wasn't there any player who matched him for the whole season?

I considered not to include him on a technical note, Siopis and Cimirot were canditates for the spot ,but fact is Mili was without doubt the catalyst of Olympiakos' title win in an otherwise terrible season for the team. His importance in defence, distribution ,( unexpectedly) goalscoring and his leader's attitude became too apparent after his transfer ,the team's many flaws were exposed and they hanged on the first half's points to finish first.He just showed that quality to win games on his own and stand out when it was needed that i havn't seen since Chori two years ago. He would have easily been player of the season if he hadn't left imo ,that title has to go to Berg ofcourse but frankly he's still a contender for it just for his impact in half a season.
Top

Something is wrong with the league if Živko Živković is a legit keeper of the season contender.

Rex wrote:Something is wrong with the league if Živko Živković is a legit keeper of the season contender.

Get it through that thick skull that he's improved

Sorry, but he is not, and the greek league is shambles unfortunatelly.
Relja's not dead
Top

Rex wrote:Sorry, but he is not, and the greek league is shambles unfortunatelly.

Houy wrote:I get that you get off on picking fights and goading others but do it somewhere else. You are talking about a player you haven't watched in years and a league you don't watch.

I am not bothering to make a point against what you are saying, nor do i disagree entirely but there are certainly other corners of the internet suited for trigger happy uninformed opinions, this site needn't be one.

Just to be clear you haven't said something incredibly offensive or reprehensible but i'm too tired to go on this merry-go-round right now , i've seen you go about it with other members and i'm just not interested. With all the respect.

EDIT: My bad for misunderstanding your intention. How to fix this.....

DON'T VOTE HIM YOU ASS !

Here's the team of the season as voted by our users in a creative formation. 13 players received 5+ votes, the two not in the squad being Zivko Zivkovic and Mako Marin. Marin actually received 6 votes ( behind Lazaros and Warda with 7 and 9 respectively ) but for it to resemble a formation he had to be the team's distinguished sub 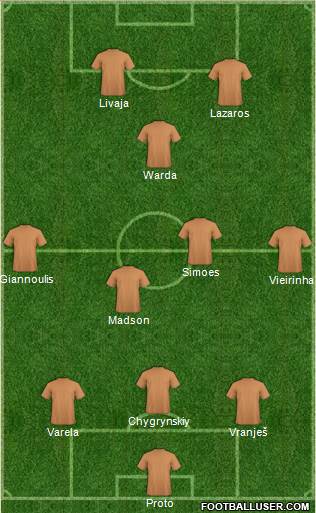 Feel free to post your own team as well