can someone create arnor traustason?
Top

could you be a bit more serious?

well.. despite we have no idea of him, here is what i have combining several sources
PES17, FIFA17, FM17
http://i.imgur.com/t5Zez0m.png
#Traustason

Guys, I have just noticed that

Apollon Smyrni, and I decided to write a couple of words about him like Irakli Maisuradze of Panionios last month.
I have mainly good things to say about him from his time in Cyprus with AEK Larnaca(2012-14), Pafos FC(2015-16), and Nea Salamina Famagusta(2016-17).
To start with, he is a very versatile Forward who can play anywhere across the front line, as a Winger or Striker, but his favourite and most frequently used position is the one of the Left-Winger.
He is mainly Right-Footed(but confident with both-feet) and likes to cut-inside from the Left-Wing on his favourite Right-Foot and try to score goals. As a Winger that he is, he plays fairly more centrally than mainstream Wingers; close to the box, and makes runs of a Striker or Secondary-Striker(Shadow-Striker), so someone may argue that he is actually a Striker("Secondary-Striker"), who plays out-wide.
Secondly, Maachi is relatively quick on the sprint, as you would expect him to be for a player of his position, but not anything that stands-out as "very quick", and for his size(183-185 cm), Maachi is also fairly agile, both on and without the ball. Of course, he is almost 32 years old, so I would expect him to lose a little bit of pace in the next few Seasons.
Additionally, his Dribbling is good, but the thing with him is that, in contrast with mainstream Wingers, you won't see him dribble that much in wide-areas which are far from the opponents' box. Most of his dribbling takes place just outside&wide from the opposition box, drifting-inside taking the ball past a couple of defenders, before making an attempt for goal. Similar movement and concept to Anthony Martial, but obviously much less skilled and not that technically good.
Moreover, as I have wrote above, Maachi is confident with both feet and can score with both of them, and to a lesser extent with his head, despite the fact that actually he is a decent header of the ball for a Winger. He has a good goal-scoring record, and like I have previously mentioned, his movement inside the box is dangerous and clever(like a "Shadow-Striker"), and really frequent for a Winger that he is.
Regarding his Passing, I don't remember his Short-Passing being significantly any better than what you would expect from a good Winger. Also, although he is not a frequent Crosser of the ball, his Crossing is actually good; accurate, with very good Curve on them and dangerous with both feet, despite the fact that I have some doubts about the speed of his Crosses/Long-Passes.
About the rest of his Physical-Stats, for a Winger he is not easy to push-over, but at the same time, for a player of his Height he is slightly lightweight, and not as Strong as you would expect him to be. Defensively, I don't remember him contributing much in this aspect, and overall I believe that he is not a very hard-working Winger(Stamina at average levels).
Finally, in my opinion, Maachi is a great versatile Forward for the teams of the bottom-half of the table in the relegation-fight. Counter-Attacking seems to fit his playing-style a lot, and generally he would get a lot of crucial goals for relatively small teams(where he would be their "main" man up-front) that fight to avoid relegation, so I think that he would be a success at Apollon Smyrni. Having said that, I will also admit that his two years(2012-14) at relatively big club AEK Larnaca were relatively successful for him individually, but not so much for the whole of the team in relation to the rest of recent Seasons. At AEK Larnaca I remember him as being something like a "super-sub" for them, and he also had a couple of injuries during his time there.
Top Could you create Galanopoulos for AEK FC Athens,please? I don't have stats to suggest,but i believe that Galanopoulos has played a few matches to form an image about him.His best position is CMF,but he can play as DMF.He is 19 years old and i think that is a fast midfielder.
Top

It is true that i have become tedious about Galanopoulos,but he scored an amazing goal during of match between Greece U21 and Belarus U21.which is worth to watch it.I believe that deserves to create him...
https://www.youtube.com/watch?v=osQXB4_Nzt0
Top

It's not a matter of deserving, he is an Aek squad player so he is going to be created eventually, not to mention he has few games as a professional. You can contribute by watching him and giving some input about his playstyle, what you think are his best attributes, how good his short passing is,.... something. That's the the last we'll have of this.
Top

It is truth that Kostas Galanopoulos doesn't have many appearences in the starting eleven of AEK Athens' games.However,he was in the starting eleven of games between AEK Athens and Club Brugge and in the first match in Brugges was excellent,as he was mobile,without unnecessary moves and helped to release the game.In the second match in Athens,he was really a box to box player running and marking everywhere and the ball possesion was being regained for AEK helping with his pressing.
Top

Added sets for Donis and Tapoko. I thought i'd wait to see them this year since i'd probably keep up with their teams but for now they are behind other players contending for their position and aren't getting much playtime. It's fine though, i am quite confident about the sets .
Up to now i've seen a couple of games of Pao and Pas Giannina. I'll focus on these teams since i watched them last year also and they're at a good level for roster/updates so they could be fully uptodate around the end of the year.
Top

You are not ready to see this but let's try..

stavrello7 wrote:You are not ready to see this but let's try..

A very early set for Pape Cisse, based on the games vs Asteras and vs Panionios. Open to suggestions. 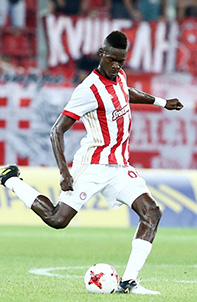 about Cisse imo Jumping is better that header accuracy. swap them
SPA maybe is worst

About Nikolaou.. here is an example of poor DEF and TW
this gap between him and his opponent is "unsafe", i doubt if he recognised that he is the player that has to mark 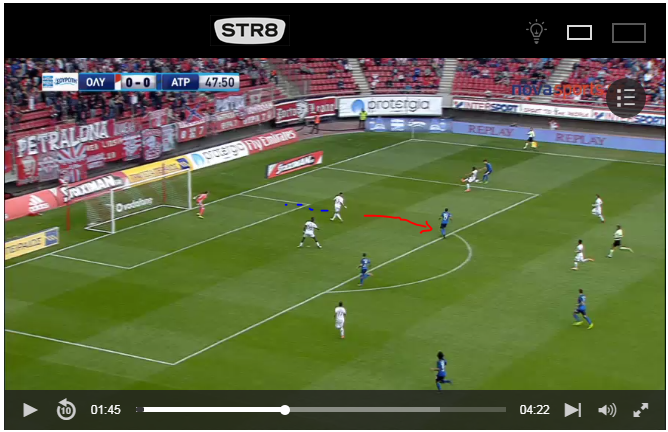 He's quite a beast, aside from strength he has a very big stride and some real speed over distance and a very good leap aside the fact that he's very tall. I'd rate his TS at 80/81 and BB a point or two higher.

I agree with Stavrello about his Jump and Header from what he's shown up to now, mainly in pre-season. He won so many duels in the air but showed a real inability to direct his headers. So i was very surprised with his great header yesterday. We should wait to see if he does more like this one but for now Jump > Header suits him more.

His SPA seems especially bad indeed, closer to mid 60s. Also in pre-season he showed some real prowess in his long passes to spot wingers with pinpoint accuracy, green material LPA/LPS. A big asset if he starts showing it again.

He seemed colllected and like he knew how to deal with difficult situations. At the same time he's a little raw mentally. Some easy mistakes and absent mindidness and he does make the wrong decicion is build up often. Since he's young also we could have him a little lower for Ment as well as Att
Top

He had great games against Paok and Pao. He is unrefined in his physical defending but his timing and positioning was really on point in most situations and mentally he showed very good composure.
His short passing was better than i thought also, enough to justify the values in Bitz's set.
Ofcourse the other thing is that he's super good physically. Jump and TS both look like low 80s.
Top

A base for Nikolaou we can work on like Cisse.

He has good spirit and some good moments but he seems raw as a defender. With the ball he looks very very basic.
Top

Cisse had some interesting battles with Moledo on Saturday. Moledo is the most dominant cb of the league and they both seemed on equal grounds.
Top

Galanopoulos is going to be the second basic central midfielder with Andre Simoes after the Johansson's serious injury.He was good enough against Panathinaikos,he lost a great chance,he was running satisfactorily and looked sure with the ball on his feet.In addition,he was trying to play vertically though his moves in the field.
Top