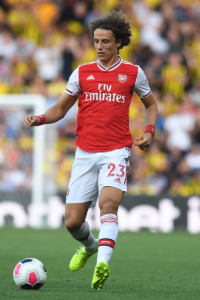 Thanks Claudio, needs to be onto the thead, just sums him up, such a uniquely gifted player
Top

Cleaner def leader monster his defence most be mor then 85 .. his beter then skriniar
Top

He's had a terrific season, I think, but he's frustrating in that he doesn't ever seem pressed ro get his body in front of the opponent...IN THE BOX.

But 76 is low, and I think his physical/athletic is a little better than this (I recognize it's already good, but still).

Has to have Sliding Tackle. Wanna say more, but then he does something that's subtly stupid.


I think Rudiger kills him tho.


Btw, his usage of passing (i.e. not holding too long like he used to), but does he need both dribbling stars?
Top 73 of attack? Even though he's doing well lately, I still think it's a lot. It would give him a maximum of 69.
And 78 from Dribble Accuracy.
Top

I think a raise to his passing skills should be considered. He's playing several crazy passes all the time on every match, driving forward to play the killer pass and usually playing it through all lines to create a goalscoring opportunity from 'short' passes. I'm convinced he was born in the wrong era, because he's a gifted sweeper that would've been hailed as one of the greats for his role back in the 80's-90's.
The goalkeeper isn't another one, he is THE number one!
Top

Much of that is true ^^^ but wrong era just means we're in an era of shitty football, led by managers who polarize everything and leave us with haves and have nots.

That and he doesn't play like he cares. He's a genuine defender who no longer seems interested in defending. Doesn't hold his line, doesn't direct Rudiger, doesn't seem bothered to recover.

how much games u guys need to make sure his DEF's white?

Yeah... white DEF is a must for him at this point. Probably the worst cb defense-wise at Arsenal in a good while and perhaps worse than Gabriel Paulista too defensively. Passingwise he's insane though, wish Arsenal would switch to 3atb to get the most of him.
The goalkeeper isn't another one, he is THE number one!
Top

I am also on board with white defense (although what number would it be to? 73? 70?), that pass was just too good to not post. To me, he is one of the bottom ~5 consistent starters at CB in the EPL when it comes to actually defending (somehow an important thing for a CB! Shocking!) alongside Dan Burn, Angelo Ogbonna, and anyone Watford plays in a given game.
Top

70 max is enough for him, no need more changes, his weakness was decision making, which reminds me with Ramos's 69 DEF in past.

about pass i want high yellow but he already have it hmm
高坂(kou.saka) 麗奈(rei.na), the beautiful girl climbing a steep hill.
Top

His defending on the corner that Sheffield United scored on in the first half a few minutes ago just is a perfect example of his obliviousness of everything defensively. He left his mark not even to chase a ball and was badly exposed when the guy he was marking 1 second later scored. I am watching his positioning defensively and Sokratis is constantly trying to move this guy into a better position since he is always out of touch with the other defenders. We know what he is, and a green defender is not what he is.
Top

Just in case it was missed updated def to 68, he’s completely given up on defending, been playing like every game like his worse Chelsea games
Top

68 is a bit way too much with 70TW and no defensive stars.

I'd rather drop MENT, RESP and TW to the levels that people think Suso should have.

To be fair, don't know there's ever been a player this hard to rate.
Top
Post Reply
711 posts