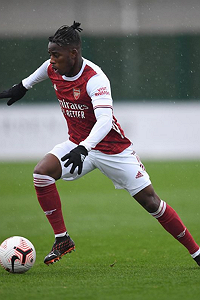 Young Winger signed for Arsenal in the Summer from the Norwegian lower leagues, and he has been doing really well for them before getting injured this Season. He is out another month it seems. A fast versatile Forward player with good dribbling, George Lewis is similar to Anthony Elanga of Manchester United in that they are both exciting raw and unpredictable forwards, who love to take players on and beat them with dribbles before finishing off their moves themselves, or when it is not possible make a cut-back to a teammate. However, the Arsenal Winger of Rwandan descent, like his Manchester United colleague, still has a long way to go in order to improve his tactical understanding and become less one-dimensional.